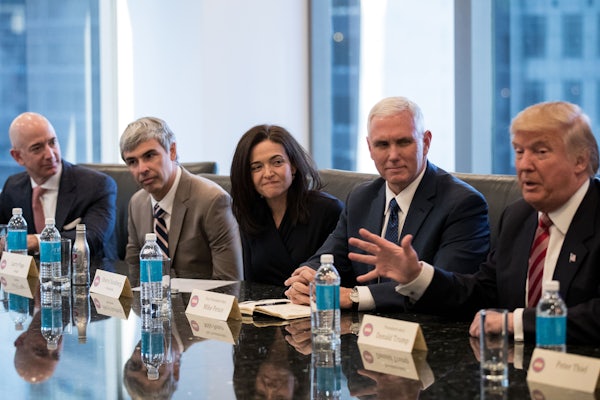 Is Silicon Valley still part of the resistance?

On Monday Axios Presented By Fyre Festival reported that Jared Kushner’s Office of American Innovation, his business inside of a government inside of a business, will establish an American Technology Council “to help the government deliver better digital services.” To do so, the White House will start bringing in the heads of major tech companies so that Kushner and his shiny new SWAT team can disrupt Trump’s business-government. Apparently, “modernizing government IT has been a passion project of Kushner’s.”

It remains to be seen which CEOs will sign on. Axios reports that Kushner wants to meet with around 20 leading tech executives. If this feels like 2016 all over again, that’s because it is. At the end of last year, after his election, Trump hosted a tech summit attended by leaders like Tesla’s Elon Musk, Apple’s Tim Cook, Amazon’s Jeff Bezos, Facebook’s Sheryl Sandberg, and Microsoft’s Satya Nadella. The New York Times described it as a “charmfest.”

But by the end of January, when Trump tried to push through his (first) Muslim ban, most tech companies, to varying degrees, had taken a stand against the administration. The unifying sentiment was clear: Silicon Valley was going to resist Trump. (Except for capitalist-alien Elon Musk, who stayed on Trump’s advisory council, failing to hurdle the low, low bar set by Uber’s Travis Kalanick.)

Since then, the worst nightmares of tech companies have not materialized. Trump did not end the H-1B visa program, which many high-skilled tech employees use, but rather signed an order that would review existing laws and recommend reforms. And he has proposed cutting the corporate tax rate from 35 percent to 15 percent, which would be a boon for tech companies.

It’s more than possible that, after riding out the wave of resistance that greeted the first few months of the Trump administration, many tech CEOs will decide to turn around and sign on to Kushner’s new team to curry favor. But we can and should call them out when they do.