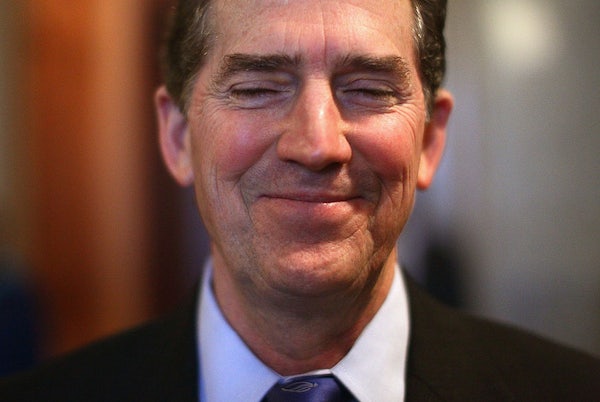 Heritage to Jim DeMint: Don’t let the door hit you on your way out.

The Heritage Foundation—not only one of Washington’s most important right-wing think tanks, but also an organization that was embraced by Donald Trump’s team during the transition—has been rocked by what some are calling a “hostile takeover.” There have been some wild reports about the crisis at Heritage this week, but one thing has been clear: Jim DeMint—the godfather of the Tea Party and Mike Pence’s close friend—was on his way out, years after conducting something of a hostile takeover of Heritage himself. On Tuesday Heritage’s board made it official in a remarkable statement.

This is practically a Maoist denunciation. It certainly will not sit will with the Demint loyalists inside Heritage who are bracing for a purge. And it hints at sweeping changes to come.

Why is this all happening? Mike Needham, who has been behind many of the changes at Heritage over the last four years, has widely been fingered as the culprit. Heritage sources told The Atlantic’s McKay Coppins and Rosie Gray that Needham had been playing pro- and anti-Trump factions within Heritage against DeMint, presumably as a power play:

To the Trump-averse elements on the board, Needham has pointed to DeMint’s growing coziness with the new administration as evidence that the think tank, a beacon of movement conservatism, needs a new steward. At the same time, Needham has been telling pro-Trump board members like Rebekah Mercer that Heritage needs a leader who will follow the president’s lead—even going so far as to float White House chief strategist Steve Bannon, a key Mercer ally, as a potential future president, according to one source.

Heritage was a pioneer in politicizing the once staid work of think tanks, but it nevertheless maintained the pretense of doing policy work and of being aligned with a larger conservative movement. Under Needham, it has become increasingly defined by its political activities—which the ongoing coup appears to affirm. But the tension between a think tank’s policy work and its politics is not the only one that needs to be resolved within Heritage. It also has to figure out where it stands vis-a-vis Donald Trump.