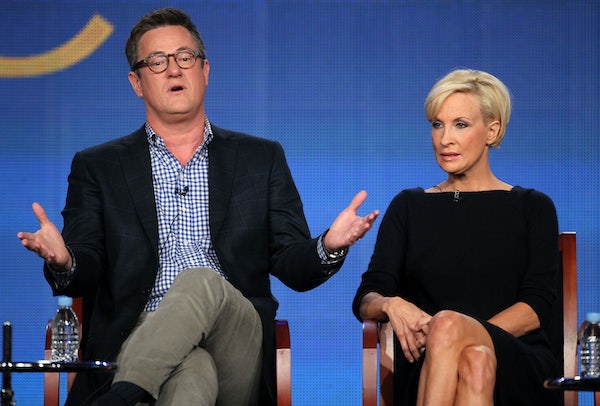 Things are bad. Our president is bad. Congress is bad. The health care bill that may pass the House today is bad. The Democrats just sent out a Star Wars-themed email opposing a bill that would likely have catastrophic effects on America’s already bad health care system. Both NBA playoff games last night were bad and Tony Parker’s knee exploded. The Mets are 12-15, which is bad. The Boss Baby, a bad movie, has made $150 million at the box office, though it is no longer the number one comedy in America. (That, with apologies to Tom Scharpling, is the White House.) And I just learned that seasonal allergies make your brain swell.

Things are not good, it’s true. But there is one good thing. Love. “The most important thing in the world,” UCLA basketball coach John Wooden said, according to the website brainyquote.com, “is family and love,” which are actually two things. And Morning Joe Scarborough and Morning Mika Brzezinski, cohosts of the MSNBC morning show Morning Joe, are in love to the point of getting married.

For years there have been rumors that the two were more than just cohosts. Their relationship was more than just three hours of aimless chat, mixed with destructive speculation, mixed with an odd flirtation with the president, who is obsessed with them. “Their chemistry—the way they bickered, and eye-rolled, and flirted in the I-can’t-stand-you-but-I-love-you way that elementary schoolers do—fueled speculation about their relationship off camera for years, a kind of reality show within a talk show,” wrote Vanity Fair.

And doing a show with your partner, according to Morning Joe, is good for a relationship: “It occurred to me that with us working together and being live on the air every day for three hours that we were forced, no matter what disagreements we had, what misunderstandings we had, to work through it and get right with each other by 5:59 A.M.” (I do not have a morning show but this sounds like a legitimately terrible way to deal with relationship problems.)

But the big question hanging over the wedding is this: Who will officiate? Here’s Vanity Fair about the biggest White House feud—and it isn’t between Steve Bannon and Reince Priebus:

In January, when they went to visit Donald Trump in the White House just a little more than a week after his inauguration, Scarborough and Brzezinski sat down for lunch with the president, Ivanka Trump, and Jared Kushner, ostensibly to talk to their longtime friend about his first week in office and issues related to women. Once the fish and scalloped potatoes had been served, and special sauces delivered directly to Trump were placed on the table, the couple said that the president came up with an idea: If they planned on getting married, they should consider doing so at Mar-a-Lago or the White House, they recalled. “That’s when Jared interrupted and said, ‘Hey, you know what? I’ve got my license. I could marry you,’” Scarborough said. (A White House spokeswoman had no comment.)

According to Scarborough, that’s when Trump snapped from the end of the table, saying: “Why would you marry them? They could have the President of the United States marry them.”

Everything is already bad, but Trump has somehow made it worse.