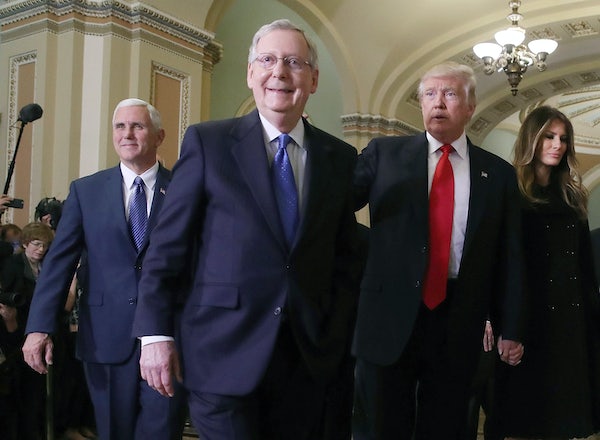 Trumpcare is about to undergo a death by a thousand cuts in the Senate.

There is a lot that can be read into the bizarre, jubilant press conference Donald Trump and Paul Ryan gave five days ago, after a bill repealing Obamacare narrowly passed the House. Trump is phenomenally needy, and at its most basic level the press conference was about affirmation. “Hey I’m president! Can you believe that?” Trump asked quizzically, as if he was still surprised that he was, in fact, president. But more than anything, it was a message to the Senate: Repeal has momentum. “I know that our friends over in the Senate are eager to get to work,” Ryan joked passive-aggressively.

Over the last five days we’ve learned exactly how eager. While a working committee—consisting of 13 men—has been formed, every indication is that the upper chamber is going to take its sweet time. On Monday, Senator Chris Coons, a Democrat, told Morning Joe that he didn’t expect the American Health Care Act to go to conference—if it gets that far—until after the midterm elections in 2018.

Axios Presented By Spectre, meanwhile, reports that fall 2017 is a more likely target—which is still a very long ways away, especially for a famously impatient president. Axios also reports that “some key Republicans are pessimistic that tax reform can be finalized this year,” as it has to follow the 2018 budget. Infrastructure, meanwhile, has no momentum with conservatives in the House or the Senate—and the Freedom Caucus, which essentially has veto power in the House, is far from excited about it.

The Rose Garden press conference increasingly looks like it came from a position of weakness, rather than strength. And if the Senate is able to pass a bill, it will likely be very different from the House’s. The result produced by conference committee would likely end up alienating either moderates or hard-liners. More importantly, the clock is already ticking. Yes, the midterms are a whole 18 months away, but many are already predicting a bloodbath. The closer we get to the midterms the harder it will be to corral skittish and vulnerable Republicans to cast a vote that could cost them their seats.

Democrats, of course, were able to do this in 2010, when the Affordable Care Act became law. But there’s a key difference between the effort to pass Obamacare and the effort to repeal it. Democrats believed very deeply in passing health care reform and their leadership was willing to accept political costs to do it. Republican leadership, meanwhile, is moving toward repeal because it seems like the least bad option. Either they repeal the bill and energize the Democratic base or they don’t and risk primary challenges from the right.