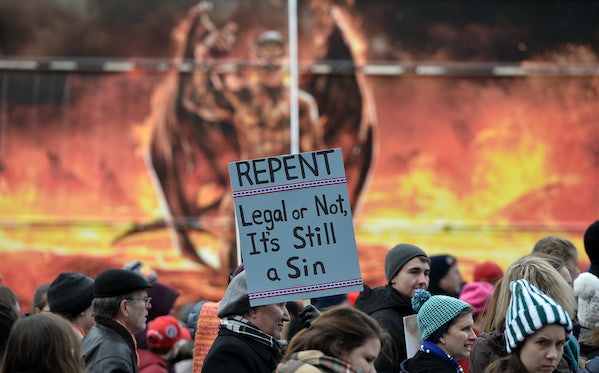 The New York Times allowed an anti-choice group to write a press release on the op-ed page.

Mad about Bret Stephens? The Times sees that and respects your rage, choosing to double down on its decision to publish right-wing propaganda. Today, The Human Coalition’s Lori Szala would like you to know that women who get abortions are killers. In an op-ed, she rejects the progressive argument that abortion access and economic justice are linked concerns:

Activists see a lot of appeal in this argument, a way to bridge the gap between liberal women and economic populists. But it comes with enormous baggage.

Above all, it’s a profoundly dehumanizing argument. It reduces mothers and their children to mere economic objects, and amounts to saying we are justified in killing those who impede our economic progress.

Szala’s proposed solution is this: “Organizations like mine can help women find jobs, enter substance abuse treatment programs, regain their children from foster care, find housing, pay utility bills and sign up for government benefits.” This is a press release, not a serious attempt to grapple with a systemic problem. Worse, this is the second time the Times has allowed the Human Coalition to promote itself on the op-ed page. The first column—by Lauren Enriquez, the group’s public relations manager—skewed polling data on public support for abortion.

We can probably blame the paper’s both-sidesism for today’s piece. In April, it ran a column by Bryce Covert arguing that abortion access is indeed an economic issue. Perhaps that’s how Times management justified its decision to publish Szala. Covert’s piece, however, contained facts. Szala’s contains disturbing factual omissions: She neglects to note that, according to the best research available, 95 percent of women who get abortions don’t regret their decisions. Or that a full three-fourths of women who get abortions cite a lack of money to care for a child as one of their motivations.

Like her coworker’s previous effort, Szala simply rehashes old arguments against abortion access. And she frames these old arguments in the most hyperbolic language possible. “Parenting presents undeniable challenges, but no one argues that those challenges give parents the right to kill their children,” she asserts. This is not a sincere attempt to engage in an intellectual discussion about abortion access and economic justice. It doesn’t actually tell us anything new about pro-life beliefs. The Times could have reprinted the comment section of LifeSiteNews to largely the same effect.

Where can the paper possibly go from here? Will it actually start asking people to submit nice things to say about Donald Trump? Oh, right.