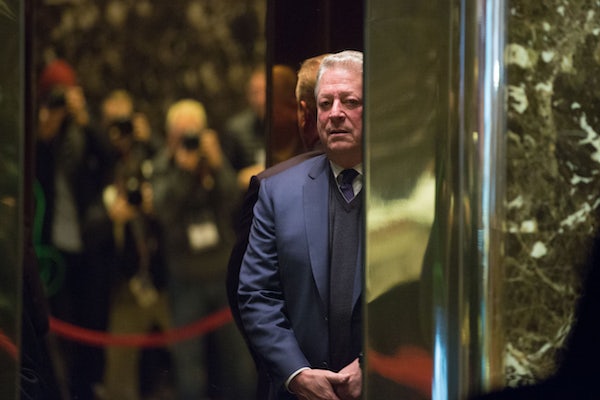 Don’t get your hopes up about Donald Trump’s phone call with Al Gore.

The president chatted with the world’s most famous climate activist about the future of the Paris climate accord on Tuesday, according to Axios. This might sound like good news to environmentalists, since Trump is reportedly strongly leaning toward withdrawing the U.S. from the international agreement to reduce global warming. This is also not the first time Gore and Trump have spoken since Trump’s election—in December, the two met at Trump Tower to discuss climate change. Gore also said in late January that he remained in touch with the president “through more discreet channels.”

Gore has always expressed optimism about these meetings. “It was very interesting,” he told MSNBC host Chris Hayes after his December meeting with the president. “It was a very intelligent exchange. It was a search for common ground.” But if history is any indication, these exchanges haven’t been very effective. In the weeks after meeting with Gore, Trump filled the environment and energy-related positions in his cabinet with climate-change deniers; he proposed slashing federal budgets for climate science and environmental protections; and took executive actions to begin dismantling President Obama’s regulations to fight global warming. Despite Gore’s best efforts, the Trump’s strategy on fighting climate change has been to do nothing at all. “We’re not spending money on that anymore,” Trump’s budget director, Mick Mulvaney, said in March. “We consider that to be a waste of your money.”

There’s no reason to think that Trump will suddenly change his mind about climate change. If anything, his conversations with Gore are just further proof that he enjoys talking on the phone with famous people. But who knows? Trump is not expected to decide what to do about the Paris agreement until at least the end of this month. Considering his propensity for making spur-of-the-moment decisions that nobody expected or can reasonably explain, anything is possible.