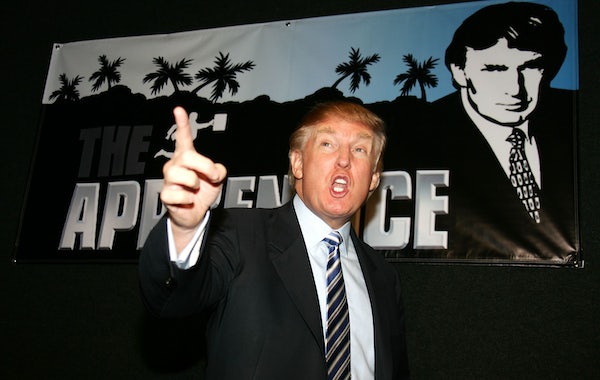 They’re catnip for headline writers and make for easy Twitter humor, especially following President Donald Trump’s firing of FBI Director James Comey on Tuesday. (The “YOU’RE FIRED!” Drudge banner was inevitable.) But invoking Trump’s NBC reality show is just about the worst way to make sense of this dangerous moment for American democracy, and it’s time we all gave it a rest.

Jimmy Kimmel correctly described Trump’s termination of Comey to his audience as “the kind of thing dictators do.” But then he added, “This is the kind of thing reality TV hosts do. They fire someone every week. Maybe that’s what happened. He thinks he’s still on The Celebrity Apprentice. It was between James Comey and Meat Loaf and, well, the Loaf won again.”

Kimmel gets a pass since he is, after all, a comedian. Pop culture references are his bread and butter. It’s harder to defend Senator Chris Coons, who on Wednesday night appeared to argue that Trump had dishonored the proud and respectable tradition of The Apprentice by not informing Comey of his termination before it hit the press. “The president, when he was the star of a reality TV show, The Apprentice, was famous for firing folks directly, in person, to their face, in a firm and decisive way,” the Delaware Democrat told MSNBC’s Greta Van Susteren. “I think this was the exact opposite.”

Coons was making a serious point here. Failing to notify Comey was dishonorable; the director deserved the dignity of getting the news directly, not from cable news. But we’re at a grave juncture in national politics—one that rightfully draws comparisons to President Richard Nixon and the Watergate scandal, and to the behavior of authoritarian leaders in undemocratic nations. Let’s not wax nostalgic about the firmness and decisiveness of Trump’s televised firings.

If Trump’s decision on Tuesday ends up hastening the end of his presidency, it will be irresistible to note that Mr. “You’re Fired” was himself fired. Until then, give it a rest.