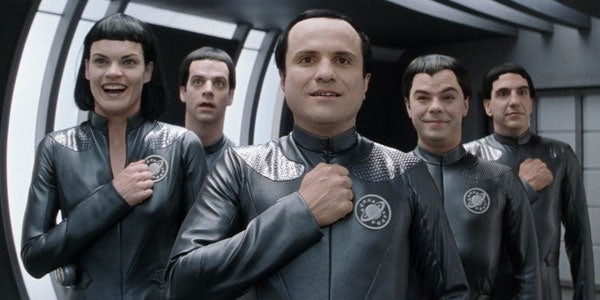 Are Trump officials the Thermians from Galaxy Quest?

The great, ongoing question about the Trump administration, one that can be applied to almost every controversy, from the bungled roll-out of Trumpcare to the firing of James Comey, is whether the White House is acting out of malevolence or incompetence. Usually, it’s some mixture of the two, with varying amounts of the main ingredients. The Muslim ban, for example, was incompetently executed, but its overwhelming flavor was malevolence. A new controversy over the Russian press gaining access to the Oval Office, on the other hand, is incompetence almost all the way down.

Yesterday, Donald Trump met with the two Sergeys: Russian Foreign Minister Lavrov and Russian Ambassador to the U.S. Kislyak (he of the Michael Flynn fame). The American press was not allowed to document the meeting, but, curiously, the Russian state-owned press agency Tass was. Photos of Trump mugging with Kislyak soon hit the internet—not a great look when your administration is face-deep in a controversy related to the FBI’s investigation of your campaign’s ties to Russia.

More seriously, intelligence officials told The Washington Post “a listening device or other surveillance equipment could have been brought into the Oval Office while hidden in cameras or other electronics.”

How did Tass get into the Oval Office? It turns out that the photographer was described as Lavrov’s “official photographer,” not a member of the press. “We were not informed by the Russians that their official photographer was dual-hatted,” an administration official told the Post. Another told CNN’s Jim Acosta, “They tricked us. They lie.” This has been the subject of great mockery, including from Obama’s National Security Advisor Susan Rice.

In this incident, Trump officials are like the Thermians from the 90s sci-fi spoof Galaxy Quest—an alien species that has no concept of fiction or lies. They are so credulous that they believe a Star Trek-like show on Earth is a history of actual events, and that its characters, including Commander Peter Quincy Taggart, are real people. When Taggart reveals to Mathesar, the chief Thermian, that it’s all make-believe—“We pretended. We lied.”—Mathesar is heartbroken. When he gasps, “Buuuut whyyy?” it’s hard not to imagine the same wail echoing throughout the White House.