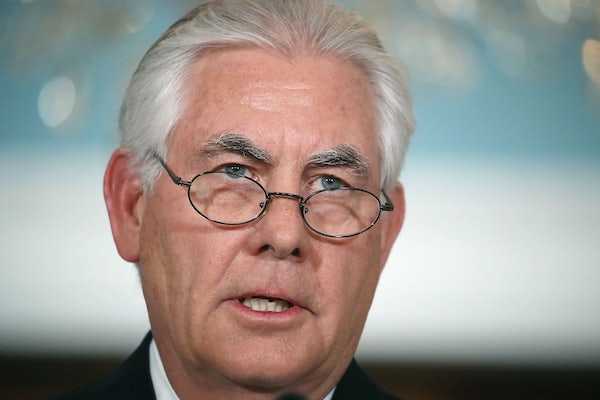 Well, this is awkward.

The document, called the Fairbanks Declaration, was signed by Tillerson and representatives for seven other nations in Fairbanks, Alaska this week, during the 10th meeting of the Arctic Council. The Arctic Council is a group of countries that hold land in the Arctic region—like Canada and Russia—and they meet in part because they are concerned about unprecedented changes happening there due to global warming.

As such, the meeting was always going to be awkward for the former ExxonMobil CEO, given that President Donald Trump has called climate change a hoax and has threatened to withdraw the U.S. from the Paris agreement. Trump has not made a final decision on the climate accord, but is apparently still leaning toward withdrawing—which made it all the more surprising that Tillerson signed a declaration recognizing that humans are “the main contributors to climate change effects and pollution” and noting “the need for global action.” State Department officials were reportedly surprised by this as well, according to the Huffington Post.

Despite the declaration, Tillerson made a point to say that the U.S. still may not remain in the Paris agreement—and may not do anything to fight climate change at all. “We are currently reviewing several important policies, including how the Trump administration will approach the issue of climate change,” Tillerson said, according to Bloomberg. “We’re not going to rush to make a decision.” Tillerson also reportedly objected to a previous version of the Fairbanks Declaration because of how strong the wording was on climate change, forcing the council to rework the language.

Still, Tillerson—who reportedly would like Trump to remain in the Paris agreement—recognized that the Arctic “has been facing unprecedented change and challenges.” As the Huffington Post noted, warming in the Arctic is happening faster than anywhere else in the world, “forcing native villagers on coasts and rivers in the region to move to higher ground as permafrost and glaciers melt and seas rise.”