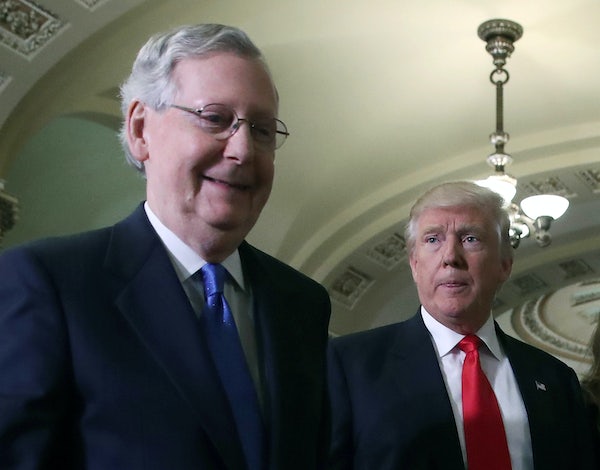 Is this really what Donald Trump losing Senate Republicans looks like?

In Monday’s New York Times, Jennifer Steinhauer makes the case that Senate Republicans are fed up with Donald Trump punching himself in the face:

Several Republicans have openly questioned Mr. Trump’s decision to fire the F.B.I. director, James B. Comey, and even lawmakers who supported the move have complained privately that it was poorly timed and disruptive to their work. Many were dismayed when Mr. Trump seemed to then threaten Mr. Comey not to leak negative information about him.

As they pursue their own agenda, Republican senators are drafting a health care bill with little White House input, seeking to avoid the public relations pitfalls that befell the House as it passed its own deeply unpopular version. Republicans are also pushing back on the president’s impending budget request — including, notably, a provision that would nearly eliminate funding for the national drug control office amid an opioid epidemic. And many high-ranking Republicans have said they will not support any move by Mr. Trump to withdraw from the North American Free Trade Agreement.

There’s an interesting dynamic at play here, to be sure. One of the consequences of Trump’s semi-hostile takeover of the Republican Party is that, for all of his talk of leading a great political movement, there are few people in Congress (especially in the Senate) who are dependent on him, or who could be characterized as “Trump Republicans.” Despite being president, Trump has done little to make the case that he’s leading the party, and has struggled to whip Republicans in Congress when necessary. He may have presented the House’s passage of the AHCA as a historic victory (which it wasn’t) but that remains an outlier. Senate Republicans greeted its passage by rolling their eyes.

And yet, Senate Republicans have hardly broken ranks with the president, even if some were sort of critical of the Comey firing. Instead they’ve retreated back into a familiar position—the same crouch they went into after the Access Hollywood tape dropped. They basically are trying to ignore Trump’s most explosive actions, and avoid taking any fallout, without doing anything remotely constructive. They’re still voting for Trump’s agenda, with some exceptions, because cutting taxes for the rich and ending regulations that help keep air and water clear is a priority they both share. They’re still holding up the Russia investigation—running interference during hearings by focusing on unmasking and leaking and largely ignoring calls for a special prosecutor. Senate Republicans have done little to slow Trump or his agenda, even if they’re uneasy with the fact that he is clearly unstable. If the tepid response to James Comey’s firing is what Senate Republicans “breaking away” from Donald Trump looks like, then we’re screwed.