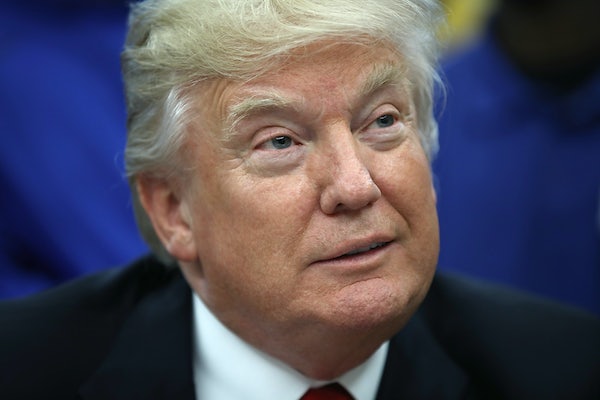 Trump would like you to know that he absolutely leaked classified information to the Russians.

On Monday evening, in the wake of The Washington Post’s stunning-yet-totally-unsurprising report that Donald Trump had revealed “highly classified” information to the Russian foreign minister and the Russian ambassador, a number of high-level Trump officials told the press it never happened. The story was made up, they said. National Security Advisor H.R. McMaster said, “The story that came out tonight, as reported, is false... At no time were intel methods or sources discussed.” Deputy National Security Advisor Dina Powell told the press, “This story is false. The president only discussed the common threats that both countries faced.” Secretary of State Rex Tillerson made another full-throated denial: “During President Trump’s meeting with Foreign Minister Lavrov, a broad range of subjects were discussed among which were common efforts and threats regarding counter-terrorism. During that exchange, the nature of specific threats were discussed, but they did not discuss sources, methods, or military operations.”

It’s no surprise that the White House was so concerned about this story. Much of the U.S.’s most important intelligence—especially related to to terrorism—comes from other countries. By exposing code-word intelligence that a U.S. ally reportedly insisted that the U.S. not share with anyone, Trump not only jeopardized his relationship with that specific source, but also the U.S.’s relationship with the sources of all of its classified information. That Trump shared this information with the Russians, of all people, who are working with Bashar al-Assad in Syria, only makes this worse. It endangers whatever operation America’s ally is undergoing in Syria, and could very well lead to the deaths of a number of people. And all to impress Sergey Lavrov.

So it’s no wonder that the White House would want to vehemently deny the veracity of this story. And yet Trump went on Twitter on Tuesday and proudly admitted that he gave the Russians some highly classified intelligence.

Trump, you may recall, basically did this exact thing last week when, after a number of top White House officials, including Vice President Pence, told the media that FBI Director Comey had been fired on the recommendation of the deputy attorney general, Trump went on television and told Lester Holt that he fired him because he didn’t like the Russia investigation and wanted it to stop.

More than anything, this particular scandal represents the dangers of Trump’s idiocy. Until now, Trump’s threat has often been assessed in terms of abstractions—of the degradation of norms and institutions. But Trump’s incompetence will be literally destructive as well.