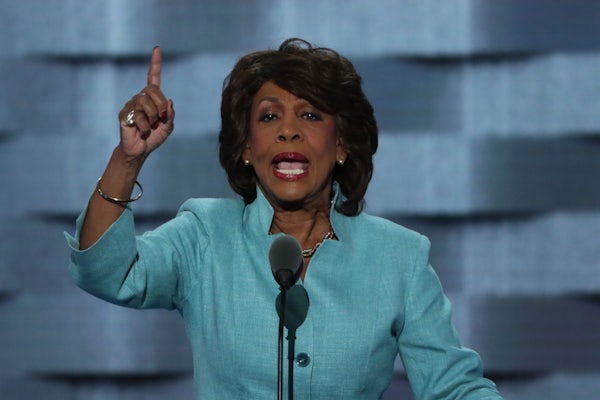 Don’t tell Maxine Waters not to talk about impeachment.

Asked about impeaching President Donald Trump on Monday, House Minority Leader Nancy Pelosi told CNN’s Chris Cuomo that some of her members are pushing to remove Trump from office, but warned, “What are the facts that you would make a case on? What are the rules that he may have violated? If you don’t have that case, you’re just participating in more hearsay.”

Representative Maxine Waters didn’t get the memo. Speaking Tuesday afternoon at the liberal Center for American Progress Ideas Conference in Washington, D.C., the California congresswoman made the impeachment case to her fellow Democrats. “I know that there are those who are talking about ‘Well, we’re gonna get ready for next election,’” she said. “No. We can’t wait that long. We don’t need to wait that long. He will have destroyed this country by then. We cannot wake up every morning to another crisis, to another scandal.” Waters then cited a new national survey published Tuesday by Public Policy Polling:

“What more do we need in the Congress of the United States of America?” Waters asked. “We don’t have to be afraid to use the word ‘impeachment.’ We don’t have to think that impeachment is out of our reach. All we have to do is make sure that we’re talking to the American public, that we’re keeping them involved, that we’re resisting every day and we’re challenging every day and we’re calling this president to account for what he’s doing and what he’s saying.”

Winding down her speech, Waters added, “I don’t know what’s going to happen after today, when all the questions are being raised about him sharing this classified information, but I think this is going to put us a little bit further on our way to what I’ve been calling for for so long and that is—impeachment.” With that, she threw her hand into the air, thanked the crowd, and left the stage. Probably half the audience leaped to its feet in applause.