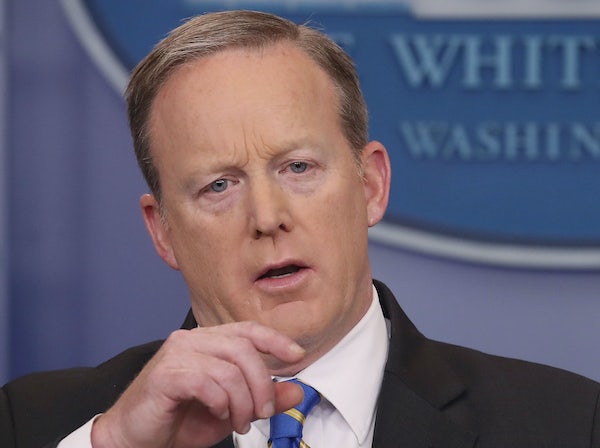 It’s impossible to put a good spin on what President Donald Trump told Russian dignitaries on May 10, according to The New York Times: “I just fired the head of the F.B.I. He was crazy, a real nut job. I faced great pressure because of Russia. That’s taken off.” This hasn’t stopped White House officials from giving it their best. Press secretary Sean Spicer attacked Comey in a statement saying, “By grandstanding and politicizing the investigation into Russia’s actions, James Comey created unnecessary pressure on our ability to engage and negotiate with Russia.” This is a bizarre argument since it reinforces what the White House had previously disputed: that the firing was rooted in the Russia investigation.

A government official briefed on the meeting with the Russians suggested that Trump was engaged in masterful diplomacy. The Times reported:

A third government official briefed on the meeting defended the president, saying Mr. Trump was using a negotiating tactic when he told Mr. Lavrov about the “pressure” he was under. The idea, the official suggested, was to create a sense of obligation with Russian officials and to coax concessions out of Mr. Lavrov — on Syria, Ukraine and other issues — by saying that Russian meddling in last year’s election had created enormous political problems for Mr. Trump.

This labyrinthine argument is even more incoherent than Spicer’s. If the Trump campaign didn’t collude with Russia, as Trump maintains, where would this sense of obligation come from? Why would the Russian government feel a duty to do something just because Trump said so?