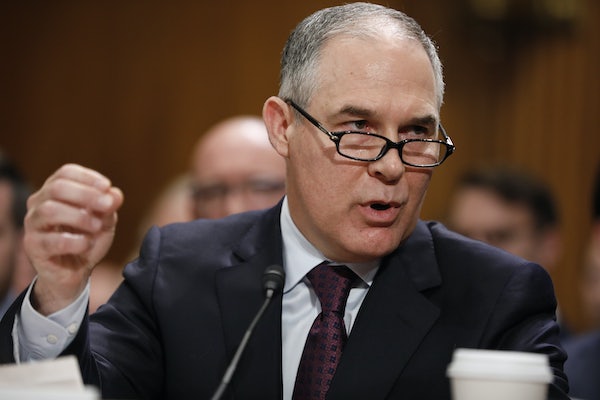 Is Scott Pruitt courting polluters to build a political career?

The last week has brought whispers that the head of the Environmental Protection Agency may have ambitions beyond his office. Citing anonymous sources “inside and outside the agency,” Inside EPA reported on Thursday that Pruitt is increasingly thought of as a “short-timer”—someone who sees his job “as a political stepping stone to an elected office rather than as an administrator who is committed to the agency’s mission and intends to understand how it operates.”

On Monday, Reuters unmasked one of people who share that theory: Myron Ebell, a prominent climate denier who led the EPA’s transition after President Trump’s election. In a leaked recording from a conservative conference last month, Ebell is heard criticizing Pruitt for not acting aggressively enough to dismantle climate change regulations. In the recording, Ebell speculates that Pruitt’s timidity is due to his “political ambition.”

But Pruitt has been anything but timid. While he may not be doing everything Ebell might like, he’s been steadily delaying implementations of environmental regulations that many in the oil and gas industry see as a burden. In fact, According to The New York Times, Pruitt’s relatively short tenure has been a boon for oil and gas producers, particularly Devon Energy—a company that has played a large role funding Republican political campaigns in Oklahoma. As it happens, the prevailing rumor about Pruitt’s political ambitions is that he’d like to one day run for James Inhofe’s Senate seat.