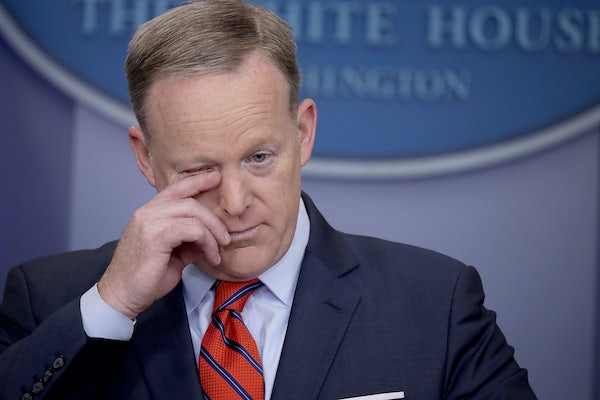 According to CNN, Spicer, a passionate Catholic, was “eagerly anticipating” meeting Pope Francis as part of Donald Trump’s entourage during the president’s visit to the Vatican. But Spicer was not a part of the group, which included Trump’s daughter, son-in-law, and lower-ranking cronies like his longtime personal bodyguard Keith Schiller. When told about Spicer’s exclusion, one source close to the White House told CNN, “Wow. That’s all he wanted.” The same source added that this was “very much” a slight.

The gratutitious coldness of this move is all the more striking because of the sacrifices Spicer has made on behalf of Trump. Previously a well-liked Washington fixture, Spicer has turned himself into an international joke by loudly and aggressively defending Trump’s every outrage and nonsensical outburst. But Trump is angry at the bad press he continues to receive, which he blames on Spicer. So the president sees fit to squash Spicer’s dream of meeting the Pope.

During the transition, Spicer said, “I’m going to look to God every day to give me the strength to do what’s right. That’s all you can ask for is to get up and say, ‘Can I do this thing?’ Help guide me and ask Him for strength.” One hopes that Spicer soon gets the strength to quit.