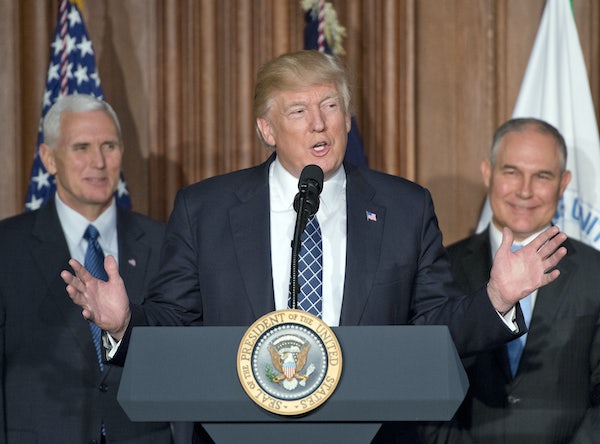 This week, the president is expected to finally announce whether the U.S. will remain in the Paris climate accord, the landmark international agreement to keep catastrophic global warming at bay. There are a lot of great questions reporters could ask the administration about this. However, at Tuesday’s White House press briefing, this is the question that was asked: “Does the president believe that human activity is contributing to the warming of the climate?”

This question almost always solicits an absurd, and therefore semi-newsworthy response. In this instance, Sean Spicer said he “honestly hasn’t asked” Trump about his views on climate change, and so doesn’t know. That’s obviously ridiculous—how is it possible that Spicer has not asked the president his views on global warming while Trump is in the middle of making a decision about an enormous global warming treaty? Also, has he never read the president’s Twitter account?

Let’s be honest: We all know the president doesn’t think global warming is real, human-caused, or problematic. He’s said it over a dozen times. He’s indicated it with all of his personnel appointments and policy actions. Asking this question is not contributing to public understanding of why Trump might undo one of the most important diplomatic achievements in decades.

And there are just so many better questions to ask. Has Trump considered the potential diplomatic fallout of leaving the Paris agreement? How does he plan to deal with that fallout? Why does Trump think every single major world leader and the majority of climate scientists are wrong, and he alone is right? Or how about asking whether Trump has any plans in place for the U.S. to fight or prevent the expected impacts of climate change in place of an international agreement?

This isn’t a new problem. Political reporters rarely ask Trump substantive questions about his environmental policy (I know: I tallied the number of times they did earlier this month). But journalists no longer need to force Trump to admit whether he accepts the scientific fact. We have passed that point. It’s time for reporters to force Trump to defend and explain his denial.