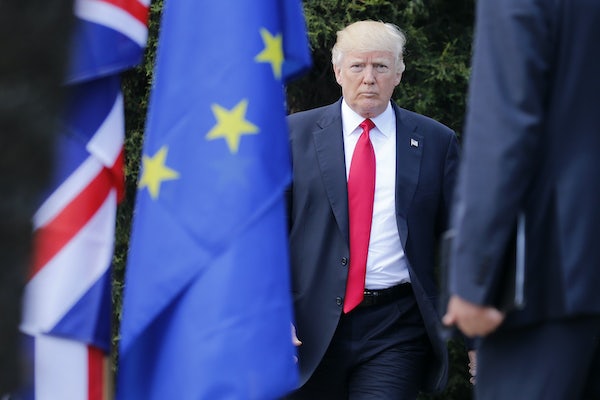 Leaving the Paris agreement would be Trump’s biggest middle finger to the world yet.

If you thought shoving aside Montenegro’s prime minister or white-knuckling French President Emmanuel Macron was bad for U.S. international relations, then you probably haven’t heard today’s news: According to Axios, Trump has decided to withdraw the United States from the Paris climate accord. The New York Times, meanwhile, reports that Trump is “poised” to withdraw from the deal, but that the decision isn’t final. On Tuesday morning, Trump tweeted:

If and when this takes effect, the U.S. will join Nicaragua and Syria as the only countries not party to the deal—an egregious snub to the world, for a number of reasons. The U.S.’s promise to significantly reduce its carbon emissions was undoubtedly the reason other countries decided to join the deal and make their own pledges. It also sends a signal that other countries can no longer depend on the America to keep its promises. German Chancellor Angela Merkel said as much after Trump’s visit with G7 leaders last week, when Trump refused to sign onto a declaration reaffirming the countries’ commitment to the Paris deal.

Most importantly, the Paris climate agreement is attempting to solve a problem that the U.S. primarily created. While China currently emits the most greenhouse gases out of any country, the U.S. has historically emitted the most, and continues to be the second-largest emitter of carbon dioxide. But it’s not the U.S. that will be hit hardest by climate change’s worst impacts; that honor goes to the world’s poorest countries, which by and large did not create the problem in the first place. By withdrawing from Paris, Trump is sending a clear message to those countries, and to the rest of the world: “We made a big mess. It’s up to you to clean it up.”