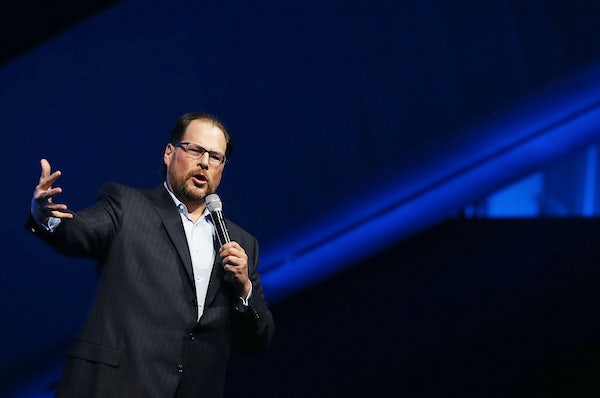 All praise Marc Benioff, the beneficent, the wise, the creator of Salesforce. The good and mighty Benioff is very rich and justly so, for he has created a software. Now society owes him due praise and the minds of its young. Or, at least, this is the conclusion of San Francisco’s public schools. The New York Times reported on Tuesday that the city is being swept up in a wave of tech billionaire investment in public education:

Mr. Benioff ultimately pledged $100 million over a decade to the San Francisco Unified School District through his company’s nonprofit arm, Salesforce.org. Unlike conventional benefactors, he is hands-on: School district administrators now submit an annual grant wish list to the Salesforce.org board for review. And Mr. Benioff dispenses not just money, but also management prescriptions.

Former San Francisco school superintendent Richard Carranza told the Times that Benioff is “almost a public-sector V.C.” This is a horrifying sentiment for a professional educator to express in public. Benioff’s money comes with strings glued to its grimy surface, and he has no experience in the field of education.

Educators shouldn’t mistake the tech industry’s interest for altruism. The Times also profiles Code.org, which advocates the teaching of computer science in public schools. There’s nothing wrong with computer science classes, of course. But the organization has received $60 million from donors like Google, Bill Gates, Jeff Bezos, and, yes, Benioff’s Salesorce. The Times describes the quid pro quo taking place: “Students would benefit from these classes, and companies need more programmers.”

The Times also reports that these efforts coincide with a tech industry push to sell equipment and software to schools. Furthermore, the industry supports fads that don’t necessarily work. Facebook’s personalized teaching program is supposed to encourage students to pace themselves and adopt a more individualized approach to education, but real-world trials have shown mixed results.

Mark Zuckerberg and Benioff are not teachers. They know a lot about tech, and they know even more about making money. But they don’t necessarily know what’s good for students—it isn’t learning how to code—and the education system has to exist for other purposes than feeding the Silicon Valley beast. It can hardly be a coincidence that they’re promoting initiatives that would presumably swell the labor pool their companies need to survive.

If billionaires really want to improve public education in America, there’s a way for them to do that: Pay more taxes. And leave education to the professionals.