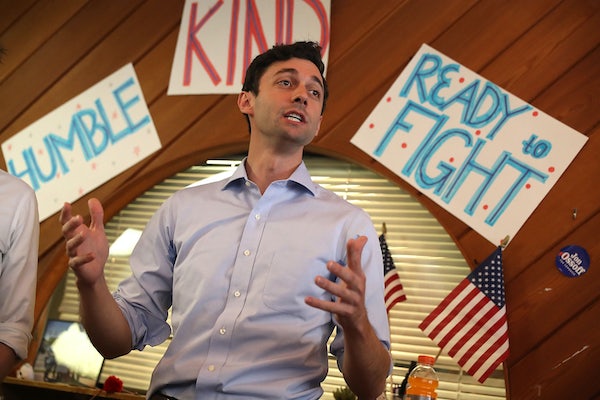 Despite his massive fundraising, shrewd campaign strategy, and overwhelming support from the anti-Trump resistance across America, Democrat Jon Ossoff fell short in his bid for the open congressional seat in Georgia’s Sixth District. His Republican opponent, former Georgia Secretary of State Karen Handel, won Tuesday’s runoff election by around four points after the most expensive House race in history. But the 30-year-old neophyte’s competitiveness in a conservative district, coupled with another House candidate’s unexpectedly narrow loss in South Carolina, ought to buoy Democrats’ hopes of putting both chambers of Congress in play next year.

Yes, Ossoff’s loss is a blow to the party, which eventually rallied its entire apparatus around his candidacy. It’s doubly disappointing following losses in special elections for House seats in Kansas and Montana earlier this year. Yet the media hype around Ossoff, particularly as a bellwether for Democratic prospects in the 2018 midterms, was always overblown. If anything, the fact that he even made the race close—in a district that former congressman and current Health and Human Services Secretary Tom Price won by more than 20 points last year—bodes well for Democrats. New York Times reporters Jonathan Martin and Nate Cohn wrote early Tuesday that “the lesson is the same whether Mr. Ossoff wins with 51 percent or loses with 49.”

Mr. Ossoff’s performance has already confirmed that Republicans in wealthy, conservative-leaning districts will be burdened by Mr. Trump’s unpopularity. Previously safe Republican incumbents in the suburbs of Philadelphia, Miami and Orange County, Calif., could all be vulnerable next year.

The bottom line: A close race in Georgia’s Sixth District is consistent with a strong Democratic performance in next year’s midterm elections — strong enough, perhaps, to retake the House. A few thousand votes either way won’t change that.

Ossoff’s defeat wasn’t the only loss with a silver lining on Tuesday night. Republican Ralph Norman won a little-watched special election in South Carolina’s Fifth District, filling the seat vacated by Trump budget director Mick Mulvaney. But Democrat Archie Parnell made the race even closer than Georgia’s was. Some speculated that the 66-year-old tax attorney may have done unexpectedly well precisely because his race lacked the kind of media attention that Ossoff’s got.

If that analysis is true, Republicans are in more trouble than this year’s special elections suggest. Most races next fall won’t be nationally hyped at all.