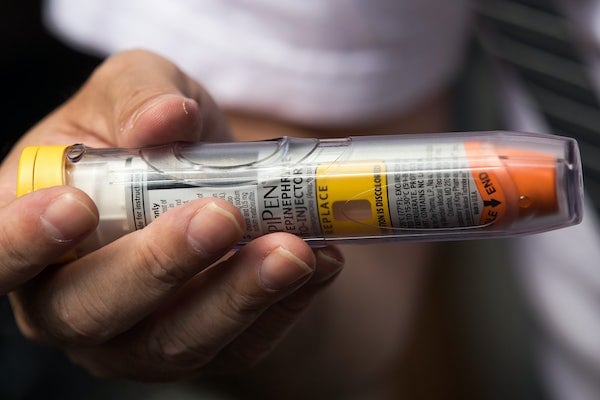 A major asthma drugmaker has been quietly investing in coal on the side.

The pharmaceutical company that just months ago was embroiled in a price-gouging scandal over its life-saving EpiPen now finds itself at the center of another potential controversy. According to Reuters’ Michael Erman, Mylan N.V. has for the last six years been buying up refined coal in order to reduce its tax bill and boost its bottom line:

Since 2011, Mylan has bought 99 percent stakes in five companies across the U.S. that own plants which process coal to reduce smog-causing emissions. It then sells the coal at a loss to power plants to generate the real benefit for the drug company: credits that allow Mylan to lower its own tax bill.

These refined coal credits were approved by Congress in 2004 in order to incentivize companies to fund production of cleaner coal. They are available to any company that is willing to invest the capital, and are set to expire after 2021.

The story gets even sketchier. Mylan Chief Executive Heather Bresch, Erman notes, “is the daughter of U.S. Senator Joe Manchin of West Virginia, the second largest coal-producing state in the country.” And Mylan would not explain to Erman why it adopted this particular strategy, though an anonymous source said the coal operations “have increased Mylan’s net earnings by around $40 million to $50 million in each of the past two years.” Mylan is apparently the only publicly traded pharmaceutical company to partake in this type of tax aversion strategy.

The sketchy part which Reuters did not point out is that two out of Mylan’s five specialty brand-name drugs treat pulmonary problems that are exacerbated by air pollution, a lot of which comes from coal. The company makes Perforomist, an inhaler that treats symptoms of chronic obstructive pulmonary disease (COPD), as well as prevents asthma attacks and exercise-induced bronchial spasm. Multiple studies have linked exacerbated COPD symptoms to air pollution, though those links are suggestive and not conclusive. Mylan is also in the asthma treatment market; the company makes EasiVent, which attaches to asthma inhalers to help the medicine more easily reach the lungs, and it recently failed to get regulatory approval for a generic version of the blockbuster asthma drug Advair. Peer-reviewed science has been linking coal combustion to more severe asthma since at least 1972.

The coal that Mylan is investing in is refined, which means it burns cleaner than normal coal (hence the tax credits for companies that fund it). But cleaner coal is still coal, the dirtiest fuel source on the planet. Continuing to promote coal, in any form, is shown to be bad for the environment and public health. It’s good business for asthma drugmakers, though.