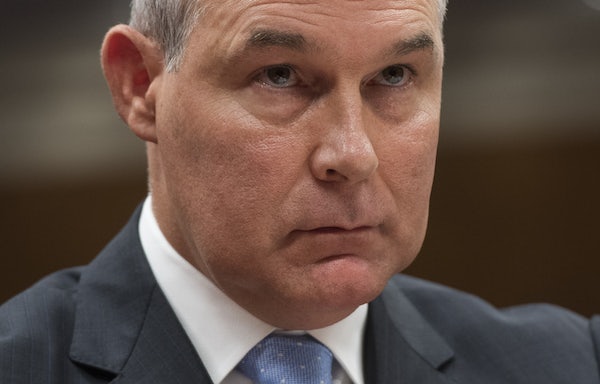 Why is Scott Pruitt meeting with an anti-gay group?

The New York Times reported Tuesday that the EPA administrator’s schedule, released under pressure from many media outlets including the New Republic, reveals the extent to which Pruitt pals around with polluters. From February through May, the paper reported, Pruitt took regular meetings, phone calls and fancy meals with “top corporate executives and lobbyists from all the major economic sectors that he regulates,” while holding “almost no meetings with environmental groups or consumer or public health advocates.”

This is unsurprising; Pruitt’s uncomfortably close relationship with polluting industries has been known for some time. But there’s one detail that is quite surprising, if also confusing. In April, Pruitt’s schedule included a call with the Family Research Council, a Christian conservative social values group that believes homosexuality is “harmful to the persons who engage in it and to society at large, and can never be affirmed,” that pornography “has spread like a plague in our nation” and that abortion “deprives society of the gifts of the unborn.” FRC does not have a large stated interest in the environment or public health. And yet, its call with the EPA administrator was apparently to “put together a small group of key business leaders around the country who are very excited about Administrator Pruitt’s new leadership role.”

What could FRC possibly be so excited about? Pruitt is a conservative Christian, and does have a past relationship with FRC. Last November, while he was still Oklahoma’s attorney general, he spoke at a pastors’ briefing organized by FRC’s ministry arm. The purpose of his speech was to oppose the Johnson Amendment, a law barring churches from supporting political candidates. “We have every right to exercise our faith in the public square,” Pruitt said at the time. His career as an attorney has been closely aligned with the religious freedom movement; as The Daily Beast noted, his first job out of law school “focused on defending Christians in religious liberty cases.”

But here’s a better explanation for the call: While most Christian groups have opposed Pruitt in the name of protecting Creation, FRC is one of very few Christian groups that supports his brand of anti-science, anti-regulatory “environmentalism.” The group believes that climate change can’t be real because God wouldn’t allow such a thing; that God gave us fossil fuels in order for us to reap their benefits. “I believe we have an obligation to be good stewards of the earth God has entrusted us with, but we should not put the planet above people, people should come first,” FRC’s Tony Perkins said in 2015.

Just as FRC takes the anti-science position on climate change, it bases most of its anti-gay rhetoric on junk science. As Wired recently explained:

The papers the FRC produces often purport to be meta-analyses—studies of studies. Rather than compiling an accurate synthesis of mainstream scientific inquiry, however, the group mis-contextualizes data to arrive at a desired conclusion. This technique is how the FRC manages to link homosexuality to, among other things, pedophilia and shortened lifespans, despite strong scientific consensus to the contrary. When the group is not twisting mainstream scientists’ numbers, it’s citing organizations such as the American College of Pediatricians, which sure sounds like the American Academy of Pediatrics but is actually a far-right breakaway group with only 200 members.

These techniques are the same ones climate deniers like Pruitt use to pretend they have legitimate concerns about the reality of global warming. And it’s a useful playbook for Pruitt to follow, as FRC has been able to legitimize itself in mainstream conservative circles despite its anti-science rhetoric. The EPA did not return my request for comment about the call, but there’s a good chance that Pruitt and the FRC were comparing notes.