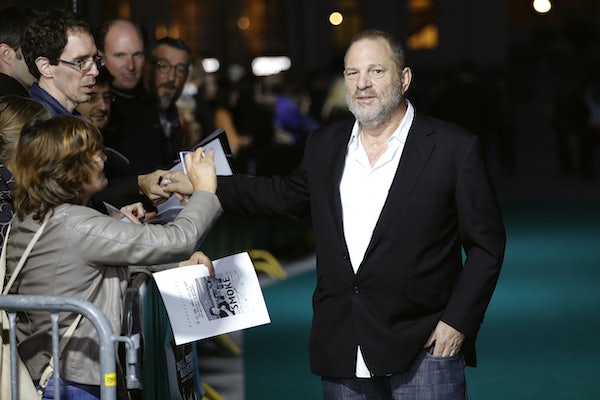 Harvey Weinstein is trying to change the subject.

In a blockbuster report about the Hollywood producer, The New York Times’ Jodi Kantor and Megan Twohey write, “In interviews, eight women described varying behavior by Mr. Weinstein: appearing nearly or fully naked in front of them, requiring them to be present while he bathed or repeatedly asking for a massage or initiating one himself. The women, typically in their early or mid-20s and hoping to get a toehold in the film industry, said he could switch course quickly—meetings and clipboards one moment, intimate comments the next.”

Weinstein wouldn’t comment on the eight settlements he reportedly has reached with women, but told the Times that “my motto is to keep the peace.” His lawyers also speak of the settlements as designed to “buy peace.” In a further attempt at peacekeeping, Weinstein issued this singularly bizarre statement, which begins, “I came of age in the 60’s and 70’s, when all the rules about behavior and workplaces were different. That was the culture then.” Having made an excuse, Weinstein adds, “I have since learned it’s not an excuse.” (Expect plenty of excuses if, as his lawyer promises, Weinstein sues the Times.)

At the end of Weinstein’s statement, after announcing a leave of absence and quoting Jay Z (“I’m not the man I thought I was and I better be that man for my children”), he says he’s “going to give the NRA my full attention” and make a (presumably critical) movie about President Donald Trump. He also says he’s donating $5 million for scholarships for women directors. In short, Weinstein is virtue signaling to his political fellow-travelers, assuring them he is still redeemable. He’s using feminism and other liberal causes as a shield to deflect accusations of sexual predation, a publicly manipulative act which perfectly mirrors the private manipulations so extensively documented by the Times.