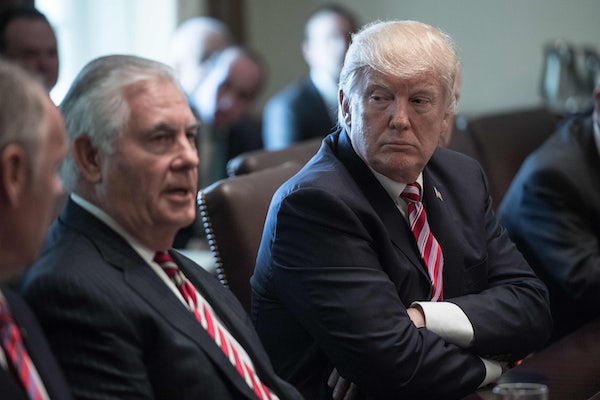 Trump: I’m much smarter than the man who called me a “moron.”

In an interview with Forbes published Tuesday, the president still seemed to be smarting from reports that his secretary of state, Rex Tillerson, called him a “fucking moron.” “I think it’s fake news,” he said, “but if he did that, I guess we’ll have to compare IQ tests. And I can tell you who is going to win.” Trump’s language suggests he doesn’t want to take a new test, but compare his and Tillerson’s scores as students, which is a good way to side-step the question of Trump’s mental capacity today.

Whatever Trump’s IQ might be, the rest of the interview testified to his unique mental processes. Asked if he felt bound to honor agreements from earlier presidents, Trump said “no.” As Forbes notes, “It’s a dangerous precedent: an America where each administration, rather than building on the agreements of its predecessors, undoes each other’s deals—effectively undermining the authority of any American head of state.” Trump also defended not appointing people to key posts, saying, “I’m generally not going to make a lot of the appointments that would normally be—because you don’t need them. I mean, you look at some of these agencies, how massive they are, and it’s totally unnecessary. They have hundreds of thousands of people.” This is nonsensical. If the agencies in question are so massive, that’s all the more reason for the president to tap capable people to run them—conservative appointees who would, presumably, find “efficiencies” in the bureaucracy. (More likely, Trump subscribes to Steve Bannon’s strategy of deconstructing the administrative state, and is trying to accomplish this through neglect.)

All in all, it was a classic Trump performance—a mix of insecurity, disregard for norms, and willful obtuseness. And not terribly intelligent, either.