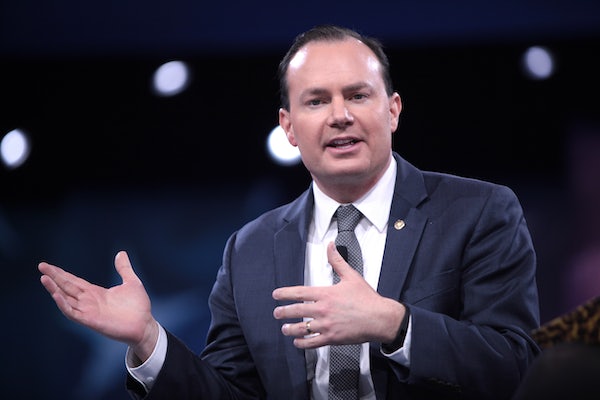 Congressman Jim Bridenstine, Trump’s controversial nominee to lead NASA, was repeatedly grilled about his past denial of human-caused climate change at a Senate committee hearing on Wednesday. Democratic senators Brian Schatz of Hawaii and Tom Udall of New Mexico pointed out that, if Bridenstine wants to lead one of the top climate science agencies in the world, he should accept the scientific consensus on global warming. “Ninety-seven percent of scientists with articles in peer-reviewed journals have concluded that climate change is real, is caused by human activity, and is already causing devastating problems in our country and around the world,” Udall said. Surprisingly, Bridenstine replied: “I agree with that.”

But this line of questioning, and Bridenstine’s response, clearly bothered Republican Senator Mike Lee, who insisted that even NASA doesn’t agree on the consensus:

There was a discussion a moment ago about climate change, and whether or not you regard climate change as being primarily caused by human activity. It’s my understanding that it’s not even the position of NASA at this point that there is a consensus on that point. So I think it was entirely appropriate for you to defer and acknowledge your viewpoint that it is an issue, a factor, but defer to answer the question as to whether or not is the primary driver of it.

In fact, NASA’s position is that it is currently “scientifically acceptable general principle” that humans cause climate change. Here’s a screenshot from the agency’s website:

NASA’s website goes on to say that “Multiple studies published in peer-reviewed scientific journals show that 97 percent or more of actively publishing climate scientists agree: Climate-warming trends over the past century are extremely likely due to human activities. In addition, most of the leading scientific organizations worldwide have issued public statements endorsing this position.”

Lee wasn’t the only Republican senator to use the hearing to attack the truth. James Inhofe, the Senate’s notorious snowball-wielding climate denier, said, “This 97 percent stuff has been debunked completely and everybody knows that.” (It hasn’t, but it’s more complicated than often portrayed.) Inhofe was irked that his colleagues were discussing climate change at all. “You can’t have a hearing anymore without everyone bringing up global warming,” he said. (Bridenstine, it’s worth repeating, has been tapped to run an earth science agency.)

The downpour of climate denial from Republicans came as Bridenstine tried to walk back his own denialism. He said he agreed with the scientific consensus. He explained, accurately, how an increase in greenhouse gases in the atmosphere leads to an increase in precipitation intensity. “It’s very real and happening,” he said. “I’m happy to say that to you and anyone else because it’s the truth.” At other times, though, Bridenstine slipped into his old ways; at one point, he said “sun cycles” could be impacting global climate trends. They’re not.