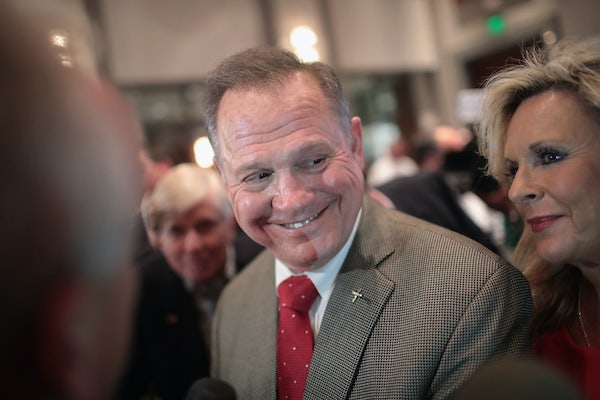 The GOP response to the Roy Moore mess is everything you need to know about the pathologies of the Republican Party.

A number of Republican senators—joined Friday morning by President Trump—received quite a bit of attention for calling on Roy Moore to bow out of Alabama’s Senate race after The Washington Post reported that he molested a 14-year-old girl nearly forty years ago. There is, I suppose, something commendable about this, but it’s the bare minimum. And the caveat “if these allegations are true” attached to these calls for Moore to exit the race dilute their real-world impact. Moore isn’t going anywhere.

The less than full-throated response from Senate Republicans—which comes as they try to push through a massive (and massively unpopular) corporate tax cut as fast as possible—is representative of the cowardice of the Republican Party’s establishment. If Senate Republicans were serious about stopping Moore, they would say that they would refuse to seat him, or at least push Alabama voters to vote for a different candidate, perhaps even a Democrat, in December’s special election.

The response from Moore’s supporters, on the other hand, represents a different kind of pathology. The Alabama GOP is sticking behind their man—and in some cases they’re not even denying the allegations. Alabama State Auditor Jim Zeigler used the Bible to, uh, exonerate Moore. “Take the Bible. Zachariah and Elizabeth for instance. Zachariah was extremely old to marry Elizabeth and they became the parents of John the Baptist. Also take Joseph and Mary. Mary was a teenager and Joseph was an adult carpenter. They became parents of Jesus.” (This is not what happened, according to scripture.)

Bibb County GOP Chairman Jerry Pow skipped the Christian gloss and said that he’d vote for Moore even if he did molest a teenager.

Alabama Secretary of State Jim Moore, meanwhile, called the allegations fake news. But the most common response has been to argue that this is a giant Democratic ploy. Here’s Mobile County GOP Chairman John Skipper: “It does not really surprise me. I think it is a typical Democratic—Democrat—ploy to discredit Judge Moore, a sincere, honest, trustworthy individual.” Moore himself took up this line of reasoning, arguing that this scandal was cooked up by the Obama-Clinton machine to discredit a pious man of the people:

Moore is even fundraising on this message!

On one side, you have Moore and his defenders, whose message is basically: “It doesn’t matter if Roy Moore molested a teenager or not, vote for him to get revenge on liberals.” On the other, you have a Republican establishment too cowardly to do anything meaningful to stop them.