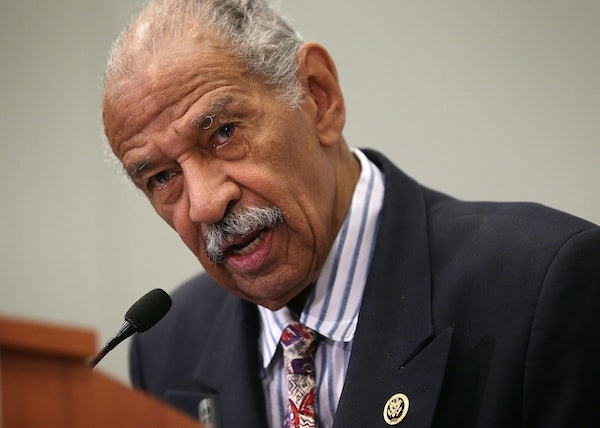 Monday began with a second woman accusing Senator Al Franken of sexual misconduct. It ended—after serious allegations against Charlie Rose and Glenn Thrush—with BuzzFeed reporting that Representative John Conyers, the longest-serving member of the House, had paid $27,000 to settle a wrongful dismissal complaint from an employee who alleged that Conyers fired her for refusing his “sexual advances.”

The complaint against Conyers was filed in 2014. It alleges that Conyers repeatedly made sexual demands and comments, and that he forced the former employee to work nights, weekends, and holidays to “keep him company.” In the documents provided to BuzzFeed the former employee said, “Rep. Conyers strongly postulated that the performing of personal service or favors would be looked upon favorably and lead to salary increases or promotions.” The complaint includes four signed affidavits backing up the former employee’s case and stating that these were not isolated instances.

Congress does not have a human resources department, and instead uses a convoluted bureaucratic process to respond to complaints. Conyers’s settlement went through this secretive process and was paid out of his office’s taxpayer-funded budget. “I don’t think any allegations should be buried ... and that’s for anyone, not just for this particular office, because it doesn’t really allow other people to see who these individuals are,” the former staffer told BuzzFeed. “When you make private settlements, it doesn’t warn the next woman or the next person going into that situation.”

This will surely not be the last harassment claim to become public. According to the Congressional Office of Compliance, there have been over 200 settlements in the last 20 years.