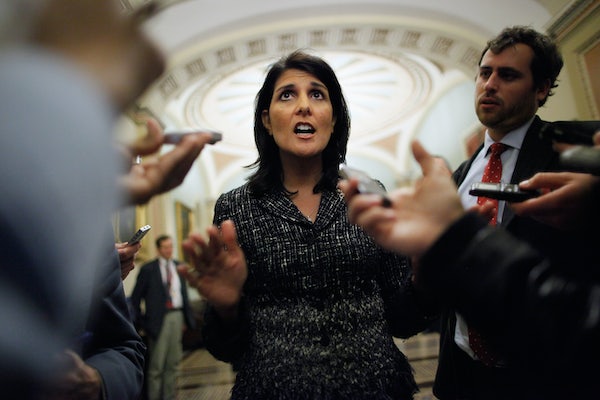 Nikki Haley uses the Olympics to fear-monger over North Korea.

Asked by Fox News if American athletes would be able to compete in the 2018 Winter Olympics in South Korea, the U.S. ambassador to the United Nations said, “There’s an open question. I have not heard anything about that, but I do know in the talks that we have—whether it’s Jerusalem or North Korea—it’s about, how do we protect the U.S. citizens in the area?” This echoes earlier comments by South Carolina Senator Lindsey Graham that the families of military personnel might have to be evacuated from South Korea.

Haley and Graham’s alarmism is diplomatically counterproductive, being both a threat inflation with North Korea and an unnecessary offense to one of America’s key allies. No one is more threatened by the possibility of a nuclear war than South Korea, yet its citizens manage to go on, treating the risk of war as part of life. The Olympics will help showcase South Korea’s resilience as a thriving society. For America to start scaring the world at this moment is to diminish South Korea’s hopeful moment on the world stage (not to mention American athletes’ hopes, too).

Yes, there’s a military standoff in the Korean Peninsula, but that’s been true since the end of fighting in 1953. Rather than suggesting nuclear war is imminent, the U.S. should learn from its Asian ally and display a little resilience of its own.