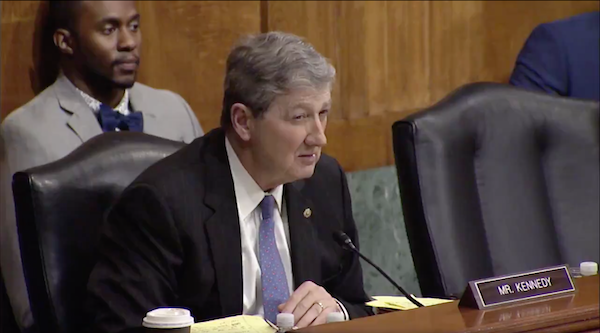 Even Republicans are getting fed up with Trump’s unqualified judicial nominees.

It’s hard to explain Trump’s nominations for federal judgeships. Brett Talley, of ghost-hunting infamy, had never even tried a case; the administration withdrew his nomination on Wednesday. But Talley can relax a little. Matthew Spencer Petersen is here to occupy his news cycle niche. In a viral video, Senator John Kennedy, a Republican from Louisiana, badgers Petersen about his legal experience—or lack thereof:

Petersen, currently a commissioner for the Federal Election Commission, proved mostly unable to answer Kennedy’s questions. And Kennedy knows what he’s talking about: He earned a J.D. from the University of Virginia’s School of Law and completed Oxford University’s Bachelor of Civil Law. Petersen has a J.D. (also from the University of Virginia) but to call his work experience “inadequate” is to be generous. Petersen failed to show a basic familiarity with the legal concepts and practices he’d encounter as a federal judge. It’s not clear that he even prepared himself for Thursday’s hearing.

Kennedy appeared frustrated not just with Petersen but with Trump’s nominees in general. His question at the end may seem odd—he asks nominees if they’ve ever “blogged in support of the Ku Klux Klan”—but he is almost certainly referring to Talley. Talley wasn’t just a ghost-hunter with no legal experience. He had a blog, and as Slate reported in November, his posting history on a University of Alabama fan site included a comment that defended the KKK. There’s no evidence (yet) that Petersen holds similar views, but Kennedy isn’t taking chances, and neither should anyone else.