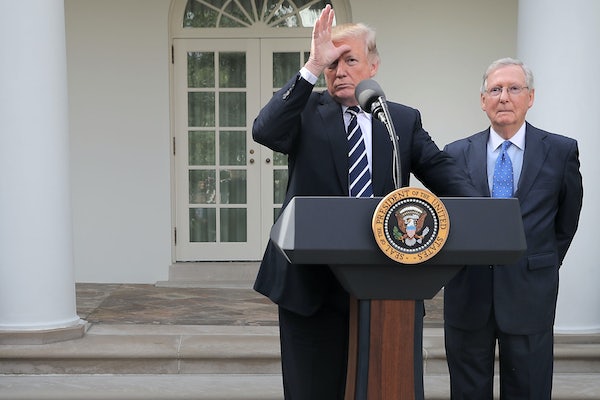 Republicans will regret this tax bill sooner rather than later.

Congressional Republicans on Tuesday are expected to vote on a huge giveaway to corporations and the wealthy that raises taxes for many in the middle class. But there is little of the drama that greeted their attempts to gut Obamacare earlier this year. Now, unlike then, the outcome is about as certain as political outcomes get. Republicans have the votes in the House and Senate, and they will send this unpopular bill to Donald Trump’s desk without much fuss.

Trump will undoubtedly gloat on Twitter. Paul Ryan, who is already taking a victory lap, will prepare for retirement, knowing that he accomplished one of his most cherished policy goals. But for most Republicans, there is little to celebrate. Over the last six weeks, there have been few policy arguments in favor of this dreadful bill. When speaking honestly, they acknowledge that they’re doing this for two related reasons: to make donors happy, and to accomplish something by the end of 2017, or else end the year having squandered a unified Republican government.

But in the rush to pass this bill, Republicans are downplaying its political consequences. With an unpopular, divisive president in the White House, Democrats already have a large advantage in the midterm elections. Perhaps Republicans are praying voters won’t notice, but this tax reform bill will only make things worse for them. In 2018, Democrats will be running against Trump and a bill that raises taxes for millions of middle class families while personally enriching members of Congress.