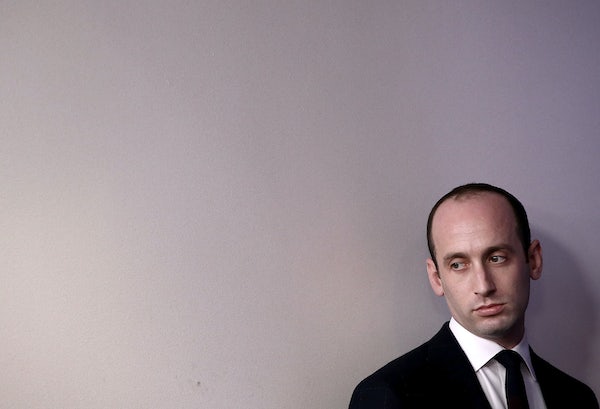 Now that Steve Bannon is gone, is Stephen Miller calling the shots?

On Tuesday, Bannon’s fall from grace was complete. In less than a week he lost pretty much everything that made him powerful: his connection to the president, the financial support of the Mercer family, his job at Breitbart. Even Bannon’s proteges, most notably Miller, appeared to turn their back on him. In an interview with CNN’s Jake Tapper, Miller said that Bannon’s comments to Michael Wolff were “grotesque” and referred to his former mentor as “an angry, vindictive person.”

But while Bannon might be out of the White House, Bannonism still lives in the Trump administration. Even as Trump made public shows of bipartisan dealmaking on immigration, Bannon’s anti-immigrant, take-no-prisoners approach is still very much driving policy.

On Wednesday, McClatchy reported that Republican congressional negotiators have identified Miller as a key roadblock in making a deal with Democrats to prevent hundreds of thousands of DREAMers from being deported. “It’s no secret that he’s an obstacle to getting anything done on immigration,” a Republican House member said. These Republicans blame Miller for making unreasonable demands in exchange for protections for DREAMers and for “coordinating with outside advocacy groups that oppose their efforts.” Miller, it seems, is single-handedly trying to prevent a deal that most Democrats and Republicans want—as does most of the country.