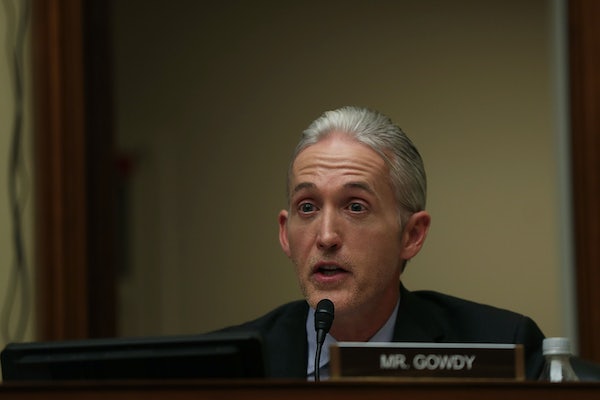 Gowdy, who entered Congress as part of the Tea Party wave in 2011, announced on Wednesday that he will not seek reelection in 2018, when many observers are predicting a Democratic wave will unseat dozens of sitting Republicans. Gowdy, who chairs the House Oversight Committee, became the ninth Republican chairman to announce his resignation since Donald Trump took office.

Gowdy will be best remembered for two things. The first is his hair, which he never quite figured out what to do with. The second is his role in the endless, politically charged Benghazi investigation, which helped cost Hillary Clinton the presidency. Gowdy took over that investigation in 2014, after there had already been seven House and Senate investigations into the 2012 attack. Despite a wealth of evidence pointing to a terrorist attack, Gowdy kept searching for a smoking gun that would implicate Clinton, including in the notorious emails that dogged her campaign.

Of course, the whole point of the Benghazi investigation wasn’t to uncover what happened in the attack on the American consulate—it was to damage Clinton. Even though Clinton embarrassed the investigation during a lengthy hearing in 2015, that effort ultimately succeeded, clouding her tenure as secretary of state and contributing to the general sense among voters that she had something to hide.