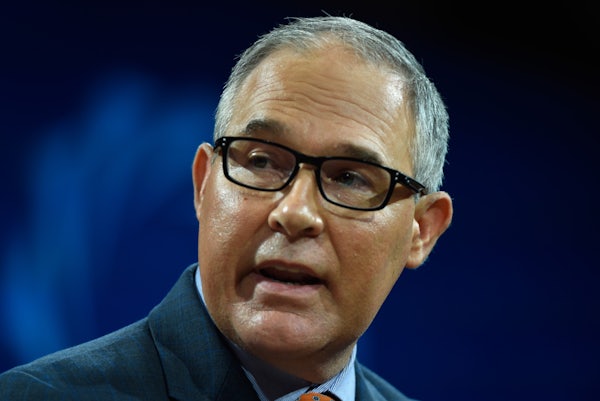 The EPA is openly promoting a climate denial think tank.

On Friday afternoon, the Environmental Protection Agency sent out a press release to tout an op-ed praising Administrator Scott Pruitt. Written Heartland Institute President Tim Huelskamp and H. Sterling Burnett, a senior fellow there, the article argues that “Pruitt is leading the EPA toward greatness” by rejecting climate science. “Trump and Pruitt share an understanding that climate change is not a significant threat to the prosperity and health of Americans,” they wrote.

The Heartland Institute markets itself as a libertarian think tank, but it’s best known for aggressively denying that global warming threatens human health and economic prosperity. Last year, the group sent reading material rejecting climate science to 200,000 public school science teachers and urged them to teach the material to students. Many teachers that received the material were aghast at the misinformation included in the package. “The materials were obviously biased against climate science without supporting data,” one teacher said.

The Heartland Institute denies that they’re climate deniers. Last summer, the group’s director of communications, Jim Lakely, refused to answer questions for a story I was writing because I had called them deniers. “No one Heartland works with ‘denies’ the climate is changing; they are merely justifiably skeptical that human activity is the chief driver of that change, and global warming is going to cause a planet-wide catastrophe,” he wrote me in an email. “You know this, but used the term ‘denier’ as a slur—and a signal to your readers to not take the scholars and experts on our side of this debate seriously—several times in your previous story.”

But as I explained to Lakely, a climate denier is not a person who denies, simply, that the climate is changing. A climate denier is a person who denies the overwhelming scientific evidence that the climate is changing because of human activity. The Heartland Institute does this routinely, so calling them deniers is not a slur. But Lakely was correct about one thing: My use of the term was indeed a signal that the public should not take the Heartland Institute’s claims about climate science seriously. That the government agency in charge of protecting the environment does, though, is seriously worrying.