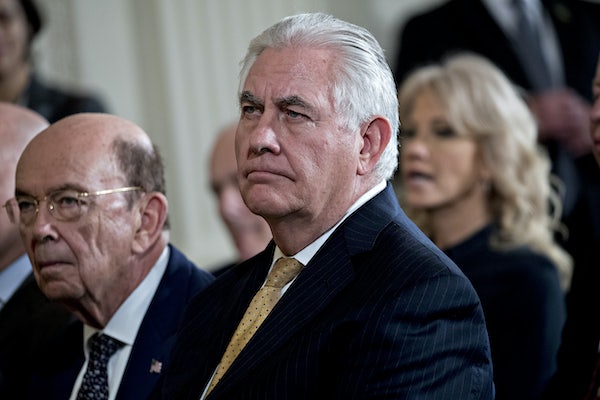 Was Rex Tillerson canned for pointing the finger at Russia?

The night before Tillerson’s unceremonious ousting via Twitter, the then–secretary of state told reporters that the nerve agent attack against a former Russian spy and his daughter in a British bar “clearly came from Russia.” That was not the White House’s position, exactly. “If we get the facts straight we will condemn Russia, or whoever it might be,” Donald Trump said.

Were Tillerson’s comments on the poisoning of Sergei and Yulia Skripal the last straw for Trump? A State Department spokesperson said in a statement Tuesday morning that Tillerson is “unaware of the reason” behind his firing, while Trump added that he and the former ExxonMobil executive “were not really thinking the same.”

Trump and Tillerson did not see eye to eye on policy, and there have long been rumors that Tillerson’s time was soon coming to an end. But reporters were quick to raise their eyebrows at the timing of Tillerson’s sudden firing and the statement condemning Russia for the recent attack, especially after Trump adamantly denied press reports that Tillerson was on his way out just three months ago.

Furthermore, Russia has been a particular subject of disagreement between the two men. While Tillerson has blamed Russia for interfering in the 2016 election and warned of future meddling in the 2018 midterms, Trump seemingly remains unconvinced—despite last month’s unanimous assessment from his intelligence chiefs, including CIA Director Mike Pompeo, Trump’s pick to replace Tillerson at the State Department.