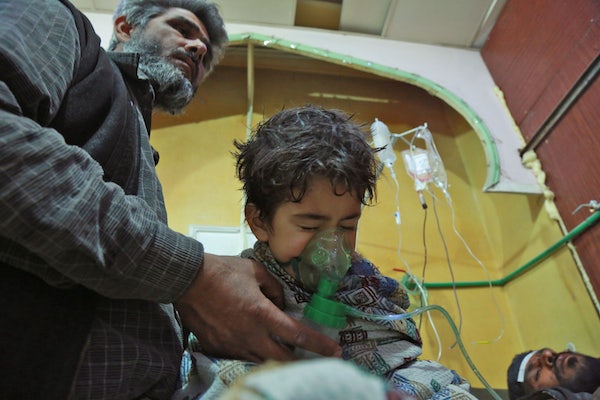 The Trump administration has a Russia problem.

An unnamed White House official told The New York Times that the “big price” could possibly involve a missile strike.

The chemical attack comes days after Trump announced his intent to pull U.S. forces out of Syria in a matter of months, and a little over a week after he ordered the State Department to freeze some $200 million in humanitarian aid for the Syrian recovery effort. Given, however, that this is at least the third mass-casualty chemical attack attributed to Syrian government forces since President Barack Obama famously declared chemical weapons a “red line” in the Syrian conflict, Trump’s switchbacks may be seen as part of a broader tradition of U.S. inconsistency in Syria.

If determining the appropriate, effective, and politically feasible response in Syria was tough in the Obama years, it’s considerably murkier now, thanks to the increasing problem Russia presents to U.S. foreign policy. Monday morning, hours after a deadly airstrike attributed to Israel hit a Syrian airbase near Homs, Russian Foreign Minister Sergei Lavrov insisted that Russian investigation of the site of Saturday’s alleged chemical attack had found no evidence of chemical weapons. Meanwhile, stocks in Russian firms took a nose-dive as sanctions imposed by the U.S. on seven Russian oligarchs on Friday took their toll. Exactly one week ago, 24 nations expelled nearly 140 Russian diplomats as a coordinated response to the poisoning of Sergei Skripal and his daughter in England. And Trump’s Twitter attack on Putin could mark a dangerous turn in their once-chummy relationship.

In a conflict where victims have long felt “forgotten” or ignored, the response to this latest attack, whatever it should be, seems all too likely focus on politics rather than addressing a humanitarian nightmare.