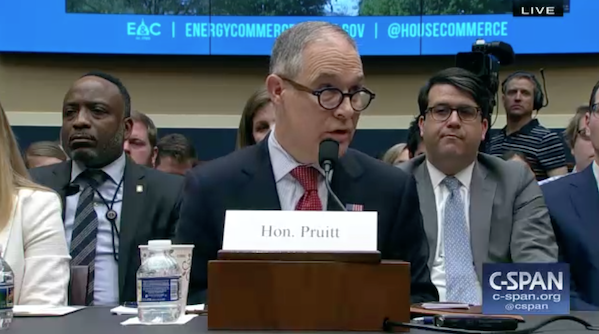 During the first of two hearings on Capitol Hill on Thursday, the Environmental Protection Agency administrator faced tough questions from House Democrats over his myriad ethics scandals and deregulatory fervor. Their Republican colleagues were more forgiving.

“To the public, I think this has been a classic display of innuendo and McCarthyism that we’re seeing too often here in Washington, that unfortunately I think works against civility and respect for people in public office,” said Congressman David McKinley of West Virginia, the chairman of the Congressional Coal Caucus. “I was hoping we’d be able to stay on policy today as much as we could, but I can see some just can’t resist the limelight, the opportunity to grandstand.” McKinley thanked Pruitt for his service.

In the last month, Pruitt has been accused of doing official EPA business with an energy lobbyist whose wife was Pruitt’s landlord, which could violate bribery laws. He’s been accused of spending at least $3 million on a round-the-clock security fleet, far more than his predecessors and higher-level cabinet officials. He’s also been accused of approving large raises for political aides against White House orders, and retaliating against EPA employees who disagree with his spending habits.

At Pruitt’s morning hearing before the House Energy and Commerce committee, a few Republicans expressed concern over these allegations. But most defended the EPA chief. Ohio Congressman Sam Johnson said it was “shameful” that the hearing had turned into a “personal attack” against Pruitt. The committee’s chairman, Gregg Harper, compared the accusations to “political bloodsport.” Texas Congressman Joe Barton called Pruitt “a victim” of D.C. politics.

Barton also offered a unique defense of Pruitt’s habit of spending thousands on first-class airplane tickets to travel across the United States on trips that he doesn’t tell the public about. First-class trips, he said, “may look bad” but are “not illegal.” Barton added that it’s not like Pruitt was flying in “party jets that were used by rock stars.”

“Have you ever rented a party jet?” Barton asked.