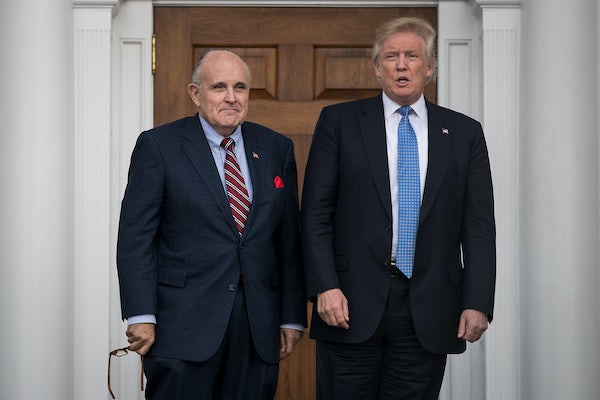 Rudy Giuliani is digging himself into a deeper hole.

The former New York City mayor, who recently joined Donald Trump’s legal team, on Friday tried to walk back his reckless media tour after being gently rebuked by the president. Giuliani admitted on Wednesday that Trump had reimbursed personal lawyer Michael Cohen for $130,000 in hush money to Stephanie Clifford, the adult film actress known as Stormy Daniels. But his efforts to unring that bell today fell short. Let’s break down Giuliani’s statement piece by piece.

First: There is no campaign violation. The payment was made to resolve a personal and false allegation in order to protect the President’s family. It would have been done in any event, whether he was a candidate or not.

Giuliani begins by asserting that the Trump campaign didn’t violate campaign-finance laws in paying Clifford, but he doesn’t deny the details that led people to think otherwise. It’s certainly possible that Cohen would have made the payment on Trump’s behalf in any circumstance. But the judicial system would have to weigh that defense against Giuliani’s remarks Thursday on Fox and Friends, which clearly suggested that Clifford, who alleges she had sex with Trump in 2006, was paid a month before the election so as not to hurt Trump’s campaign. (“Imagine if that came out on Oct. 15, 2016, in the middle of the, you know, last debate with Hillary Clinton,” Giuliani said. “Cohen didn’t even ask. Cohen made it go away. He did his job.”)

Here, Giuliani is claiming that he didn’t have all the facts when he discussed Trump’s sensitive legal affairs on national television. Despite this assertion, he seemed to understand the situation pretty well during his media tour. He told the Washington Post’s Robert Costa how the payments were structured, when Trump knew and didn’t know about them, and that he’d even discussed the matter with Trump in recent days. All in all, that seems to reflect a pretty good understanding the president’s knowledge of these matters.

Finally, Giuliani wraps up his clarification with more obfuscation. Nobody disputes that Trump had the power to fire the FBI director. The question was always why he fired Comey. Trump himself has indicated multiple times that the answer is connected to the Russia investigation, and “recent revelations” wouldn’t affect why Trump fired him at the time. The real dispute among legal experts is whether a president can commit obstruction of justice when he uses his constitutional powers. But Giuliani misrepresents that pivotal debate for one that nobody is actually having.