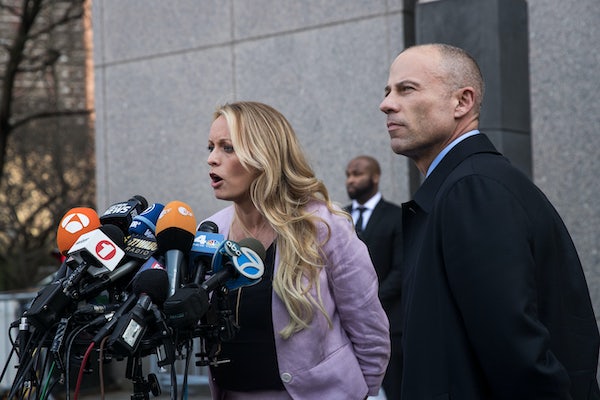 Peter J. Hasson, a reporter for the Daily Caller News Foundation, tweeted a screenshot of an email he received on Monday from Avenatti, Stephanie Clifford’s media-friendly lawyer, threatening to sue the reporter and his publication for defamation for publishing “hit pieces that are full of lies and defamatory statements.”

The email came shortly after Hasson and a colleague published an article stating that “Avenatti’s past is littered with lawsuits, jilted business partners and bankruptcy filings. People who have worked with the lawyer described him to TheDCNF as ruthless, greedy and unbothered by ethical questions.”

Avenatti’s legal threat is in sharp contrast to his interactions with other media outlets: He is a regular guest on both CNN and MSNBC, where he’s become a minor celebrity of sorts among liberals who are eager to see someone, anyone gain the upper hand over President Donald Trump and his personal lawyer Michael Cohen.

Though Avenatti may consider what Hasson wrote to be unfair, that’s still a far cry from “actual malice,” the legal threshold for defamation under U.S. law. Other lawyers, including legal blogger Ken White, saw all smoke and no fire behind Avenatti’s threats.

As a matter of course, I don’t usually report on legal threats. Anybody can threaten to sue someone; it doesn’t actually mean anything until the paperwork is filed. But this is a good opportunity to note that Avenatti, who has built quite a following on the left, is a lawyer whose professional obligations to a client happen to intersect with liberals’ political goals. That happenstance shouldn’t blind Trump’s opponents to Avenatti’s more troubling antics, especially when they mirror those of his chief adversary.