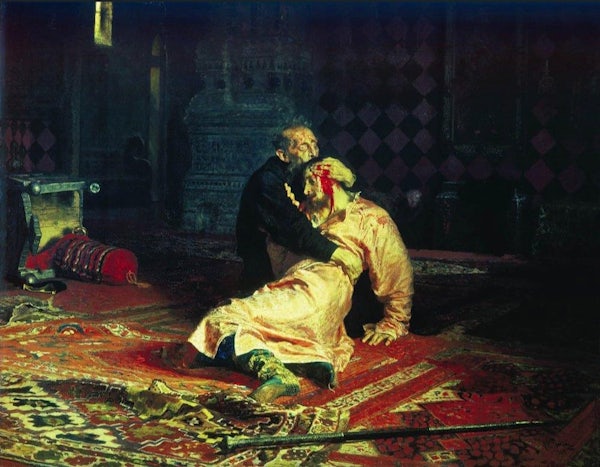 Why did a Russian man vandalize a painting of Ivan the Terrible?

After drinking vodka in the café of Moscow’s Tretyakov gallery, a 37-year-old man from the town of Voronezh used a metal pole from a security rope to attack Ilya Repin’s 1885 painting Ivan the Terrible and His Son Ivan on November 16, 1581. The painting is now “badly damaged,” the gallery says, the canvas torn in three places.

The painting depicts Ivan the Terrible holding his son after delivering the blow that would kill him. Repin supposedly conceived of the painting a few years earlier, inspired by the theme of vengeance in Rimsky-Korsakov’s symphonic suite Antar. Some Russian nationalists have claimed that the bloody incident never happened, although most historians differ (the son was furious with the father for attacking his pregnant wife; relations deteriorated). Some Orthodox Christians even tried to get the gallery to remove the painting, claiming it was offensive. The gallery refused.

Ivan the Terrible is undergoing something of a makeover these days. In 2016, the Russian Minister of Culture Vladimir Medinsky unveiled a statue of the leader, who killed thousands of Russians during his 16th century oprichnina. Look at Charles IX of France, Medinsky pointed out. He killed a lot of Hugenots.

Sophie Pinkham has recently written about the nationalist myths of war and triumph that are being rebuilt around the legacy of Ivan the Terrible. Ivan’s siege of Kazan, immortalized on film in Eisenstein’s film about his life, was in 2003 celebrated in a military history book published by Russia’s defense ministry.

It remains unclear, however, what motivated the unnamed vandal of the painting, who said only that he became “overwhelmed by something” after drinking the vodka.