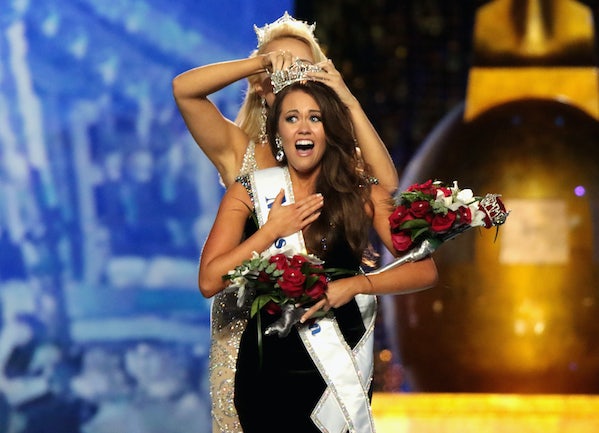 Gretchen Carlson, chairwoman of the Miss America Organization, announced Tuesday on Good Morning America that starting next year, the annual event will no longer include swimsuit and evening gown portions. “We are no longer a pageant,” Carlson, who won Miss America in 1989, said. “We are a competition.”

Several conservative commentators expressed disdain for this change. Noah Pollak, a contributor to the Washington Free Beacon, Commentary, and The Weekly Standard, tweeted:

Alex Griswold, a reporter at the Free Beacon, mocked the decision by invoking a famous answer given by South Carolina’s Caitlin Upton in the 2007 Miss Teen USA pageant.

Some conservatives supported the move, though. “Who can deny the inconsistency of a competition that has women parading around in scanty swimwear, with the goal of winning a scholarship and making America a better place?” Brianna Heldt wrote at Townhall. “When it comes to entertainment in general, many conservative television viewers have long demanded less skin and more family-friendly substance.”

The swimsuit portion has been criticized since the competition began in the 1920s, originally because it was considered racy and later for its objectification of women. An unscientific 1995 survey found that two in three viewers were in favor of the swimsuit portion. Public opinion appears to have turned, however, as Carlson stated Tuesday that the segment was “not a highly rated part.”

“We’ve heard from a lot of young women who say, ‘We’d love to be a part of your program but we don’t want to be out there in high heels and a swimsuit,’ so guess what, you don’t have to do that anymore,” Carlson, a former Fox News host and #MeToo advocate, said. “Who doesn’t want to be empowered, learn leadership skills and pay for college and be able to show the world who you are as a person from the inside of your soul.” She added, “That’s what we’re judging them on now.”

Which is to say, the Miss America competition might no longer judge the female body—at least not overtly—but it will continue to parade young women on stage to judge their worthiness to society.