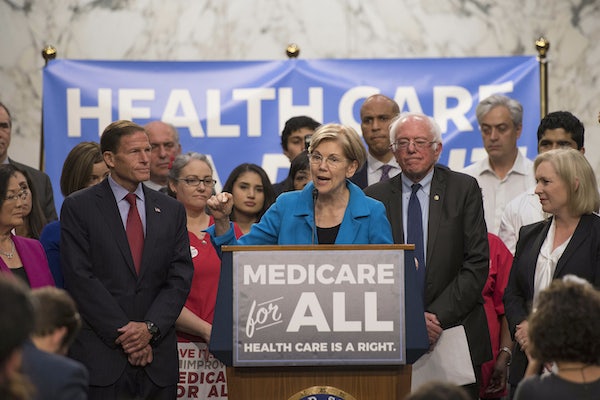 Social Security and Medicare troubles could be winning issue for Democrats.

The Wall Street Journal is reporting that Social Security program is running into a rough patch thanks to Republican tax cuts that went overwhelmingly to the wealthy and anemic wage growth. “The Social Security program’s cost will exceed its income this year for the first time since 1982, forcing the program to dip into its nearly $3 trillion trust fund to cover benefits,” the newspaper notes. By 2034, those reserves will be depleted and Social Security will no longer be able to send it its full scheduled benefits, according to the latest annual report by the trustees of Social Security and Medicare released Tuesday.” Medicare’s hospital insurance fund is facing a similar crisis and could be depleted by 2026.

Democrats have been arguing about how to craft a winning message in the midterms given the strong economy. Polls show that health care tops the list of issues voters care most about.

Republicans suffered an erosion of popular support when they tried to repeal the Affordable Health Care Act. A recent poll revealed that 67% of Americans agree with the statement “the economy may be growing but wealthy people at the top are getting so much more of the benefit than middle class and working people.” These sentiments, combined with arguments about Social Security and Medicare becoming imperilled through reckless tax cuts, could give Democrats a winning formula for the 2018 midterms.