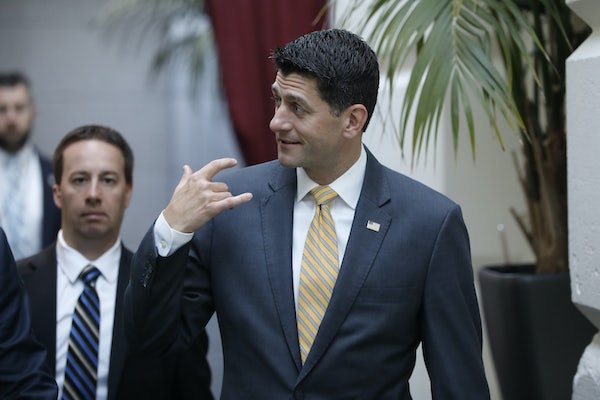 The speaker of the House is finally taking a stand against President Donald Trump’s “spygate” conspiracy theories and presidential pardon claims. “Speaker Paul D. Ryan agreed on Wednesday that the F.B.I. did nothing wrong by using a confidential informant to contact members of the Trump campaign as it investigated its ties to Russia, contradicting President Trump’s assertions of a broad conspiracy by federal law enforcement,” The New York Times reports. “And he warned that Mr. Trump should not try to pardon himself, despite Mr. Trump’s assertion two days earlier that the president has the power to take such a step.”

Asked about the pardon by reporters, Ryan said, “I don’t know the technical answer to that question, but I think obviously the answer is he shouldn’t. And no one is above the law.”

Ryan’s willingness to break with the president stands in contrast to the way the Republican lawmaker has waffled on Trump’s transgressions in the past, often indicating he gives minimal attention to the president’s tweets.

On the “spygate” matter, Ryan is following the lead of House Oversight and Government Reform Chairman Trey Gowdy, who is retiring from Congress. Ryan himself is preparing to leave public life. Republicans who will continue in congress, like Senate Majority Leader Mitch McConnell, are notably more reticent on criticizing Trump. One of the lessons of the Trump era is that Republicans are capable of standing up to a lawless president if they are on the verge of exiting active politics. In effect, knowing that they are leaving public life is the only thing that gives them the courage to live up to their constitutional duties to check the presidency.