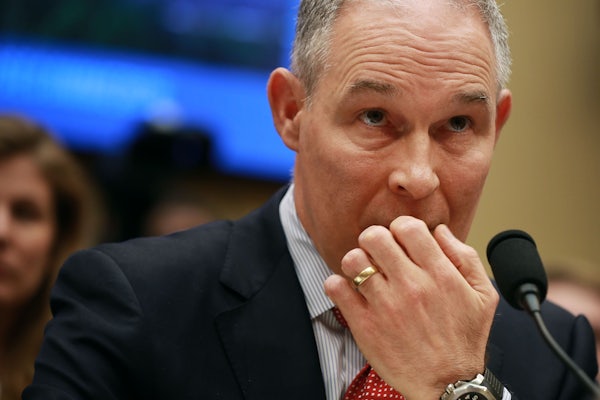 Pruitt, the head of the Environmental Protection Agency, has earned his share of irresistible headlines lately, including reports about his efforts to procure Ritz Carlton lotion, fancy pens, a Chik-fil-A franchise, and a used mattress from the Trump International Hotel in D.C. Meanwhile, two of his close aides—a senior counselor and his scheduling director—resigned on Wednesday.

While it’s useful to know the extent of Pruitt’s grift, his scandals are instructive when viewed from another angle. In March, President Donald Trump fired David Shulkin, the head of the Department of Veterans Affairs, ostensibly for mismanaging public funds. As CNBC reported at the time:

Shulkin’s now-bruised reputation and relationship with Trump — who previously had been a big fan of his — stem from several issues.

One is the outcry over an internal watchdog’s finding that Shulkin used taxpayer money for his wife’s airfare during travel with him on an official trip to Europe last year.

Another problem is the long-standing criticism of the quality of health care delivered to veterans, waste within the VA and Shulkin’s resistance to increasingly outsource vets’ health care to private providers as many conservatives want to see happen.

Shulkin’s abuse of taxpayer funds, while scandalous, probably wasn’t why he lost his job. More likely it was his opposition to privatizing the VA, an idea Trump’s closest advisors and allies support. That would explain why Pruitt survives, despite countless scandals that include much more egregious travel expenses: Conservatives overwhelming support his deregulatory agenda.