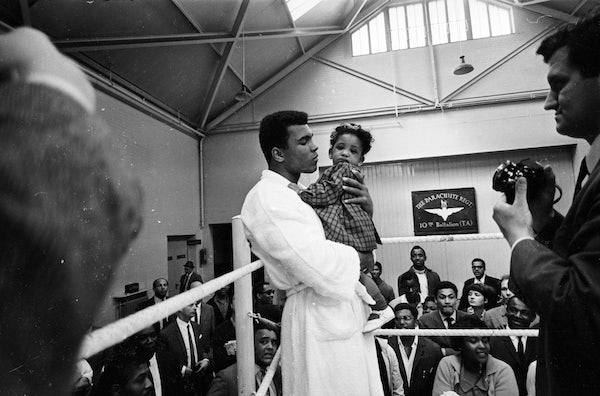 Trump might pardon Muhammad Ali, who had principled reasons for not serving in the Vietnam War.

President Donald Trump is considering a posthumous pardon of the late boxing legend, who was convicted of draft evasion in 1967 and sentenced to five years in prison. “I’m thinking about Muhammad Ali,” Trump told reporters on Friday before leaving for the G7 summit. “I’m thinking about that very seriously and some others.”

Ali, who died in 2016, never served his prison sentence because he won his case on appeal, with the Supreme Court unanimously overturning his conviction in 1971. Given this fact, Ali attorney Ron Tweel said in a statement later on Friday, “a pardon is unnecessary.”

Trump has been on a clemency kick of late. Earlier this week, he commuted the sentence of Alice Marie Johnson, a 63-year-old grandmother who served 20 years in prison for a nonviolent drug offense, and weeks ago pardoned the late Jack Johnson, the first black heavyweight boxing champion, who was convicted in 1913 for transporting a white woman across state lines. Trump has already pardoned five people, an unusually fast clip for a president for a president who’s just a third of the way through his first term.

Ali paid a heavy cost for conscientiously objecting, as a black Muslim, to serve in the Vietnam War. Trump avoid serving, , too, albeit through legal means. As The New York Times reported in 2016, Trump received five deferments—four for education, and one for bad feet: “But after he graduated from college in the spring of 1968, making him eligible to be drafted and sent to Vietnam, he received a diagnosis that would change his path: bone spurs in his heels. The diagnosis resulted in a coveted 1-Y medical deferment that fall, exempting him from military service...”

Trump told the Times that the spurs were a “temporary,” “minor” medical condition.