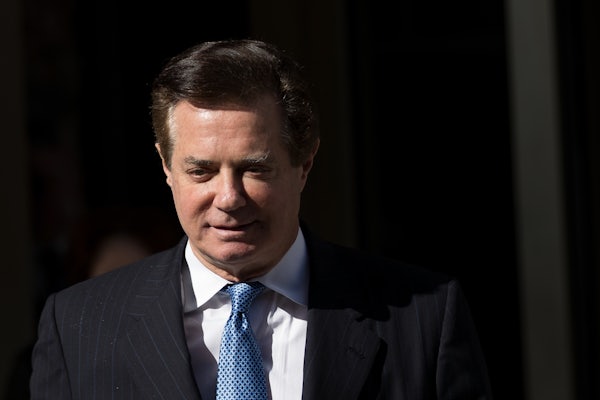 The former Trump campaign chairman’s legal troubles worsened on Friday as the special counsel Robert Mueller’s office formally charged him with obstruction of justice and conspiracy to obstruct justice. Also charged for the first time in the indictment was Konstantin Kilimnik, a Russian political consultant who worked as Manafort’s aide in Ukraine. Kilimnik is the first new defendant to be indicted in the sweeping federal inquiry into Russian electoral meddling since February.

The new charges come less than a week after Mueller accused Manafort of witness tampering and asked a federal court to revoke his bail. In court filings, Mueller alleged that Manafort and an unnamed man identified as “Person A”—later identified as Kilimnik—used encrypted messaging apps to encourage two other witnesses to commit perjury. Those witnesses instead alerted federal investigators to the conversations.

Kilimnik, a 47-year-old translator born in Soviet-era Ukraine, started working with Manafort during the latter’s days as a political consultant working for Moscow-aligned political parties in Kiev. Manafort is currently awaiting trial on charges that he illegally funneled millions of dollars he made in Ukraine back to the United States. In addition, Kilimnik is reportedly under Mueller’s scrutiny for his connections to the GRU, Russia’s military intelligence agency.

It’s notable that Mueller’s new charges also follow weeks of veiled threats and intense criticism from President Donald Trump, including a tweet claiming he could pardon himself. Friday’s charges don’t directly relate to the core inquiry into the Trump campaign’s ties to Moscow or whether the president illegally interfered in the Russia investigation. But they send an unmistakable (and perhaps unintentional) signal from the special counsel: Yes, obstruction of justice is a crime.