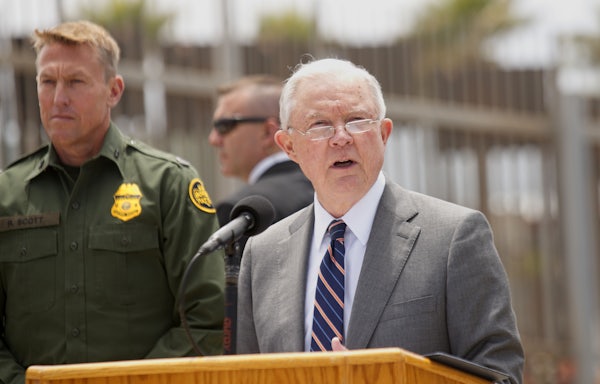 In a 31-page opinion on Monday, the attorney general ruled that domestic-abuse survivors and people fleeing criminal gangs couldn’t claim asylum on those grounds alone. Even for an administration whose immigration policy is defined by cruelty, Sessions’s unilateral move stands out for its heartlessness.

“Generally, claims by aliens pertaining to domestic violence or gang violence perpetrated by non-governmental actors will not qualify for asylum,” Sessions wrote. “The mere fact that a country may have problems effectively policing certain crimes—such as domestic violence or gang violence—or that certain populations are more likely to be victims of crime, cannot itself establish an asylum claim.”

The case centered on a Salvadoran woman, identified only as A.B., who was arrested after crossing the southern U.S. border in 2014 without authorization. A.B. requested asylum on the grounds that she suffered frequent physical, verbal, and sexual abuse from her husband. An immigration judge denied the request, but the Board of Immigration Appeals reversed the decision and granted asylum.

Sessions intervened in the case in March. Some of his conclusions are marked by tortured logic, such as his mind-bending logic about the factual record for why A.B.’s husband may have abused her.

The Board, required to find “clear error” of a factual finding, pointed to no record [or] evidence that respondent’s husband mistreated her in any part “on account of” her membership in the particular social group of “El Salvadoran women who are unable to leave their domestic relationship where they have children in common.” The Board cited no evidence that her husband knew any such social group existed, or that he persecuted [his] wife for reasons unrelated to their relationship.

Advocates for domestic-abuse survivors had long feared that Sessions, an avowed foe of legal and undocumented immigration alike, would use his powers to deny safety to women fleeing abusive households. In Monday’s ruling, those fears became a reality.