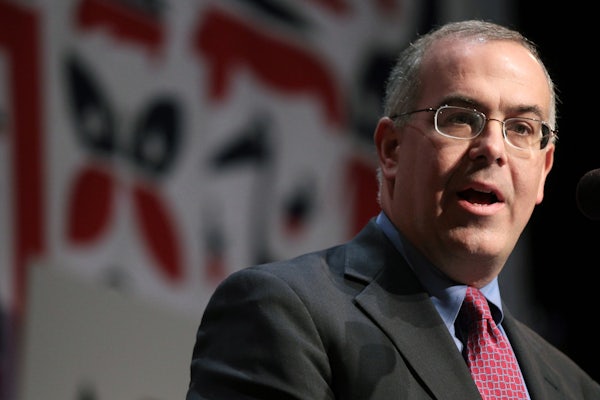 David Brooks needs a name for his new religion.

As a Never Trump conservative, The New York Times columnist has been politically homeless in recent years and as it turns out he is also a theological vagabond. As reported by the Jewish Telegraphic Agency, Brooks in a recent event at George Mason University described himself as “religiously bisexual.”

Asked by economist Tyler Cowen what he meant by that, Brooks responded, “I need my own bathrooms”—an attempt at humor suggesting confusion on Brooks’s part as to what, exactly, bisexuality is. Then he offered a more sober and elaborate answer:

I grew up in a Jewish household. And when you grow up in a Jewish household and Jewish family, kept kosher all those years, you read the Passover seder, and you feel deeply how stories enter you and the story of Judaism. And I feel so Jewish. A lot of my friends are Jewish. My jokes are Jewish. My style is Jewish. And so you feel that you’re just deeply and irrevocably embedded in that story.

At the same time, I went to the school that probably had the biggest influence on me was called Grace Church School. I was in the choir, and so I sat in chapel every day. Then I went to an Episcopal camp for 15 years, and then I read Reinhold Niebuhr, and then I fell in love with St. Augustine, and somehow you find that story settling into you. And so I feel more Jewish and more attached to the Christian story than ever. Both. So that’s why I’m bisexual.

Leaving aside the dubious use of the word “bisexual,” Brooks does speak to a genuine experience that many who have grown up in a pluralistic society share, of feeling the pull of different traditions and communities.

But the new syncretic fusion of Judaism and Christianity makes no sense. After all, there’s already a name for Jews who accept the tenets of Christianity: Christians. Most of the earliest Christians were Jewish converts. Whatever blurry line might have once existed, these are two different religious traditions. There are, to be sure, people who call themselves “Messianic Jews” but that designation is regarded with suspicion by mainstream Jewish groups, who see this position as covert proselytizers.

As with his neo-conservative politics, Brooks’s religious musings spring from a nostalgia for the consensus America of the 1950s. This was the era of civil religion, when the idea of faith as a pillar of patriotism was widely affirmed. As Eisenhower declared in 1952, “Our form of government makes no sense unless it is founded in a deeply felt religious belief, and I don’t care what it is.” The leading theologians of this consensus-supporting civil religion were Will Herberg and Reinhold Niebuhr.

For Brooks no less than Eisenhower, the actual theology or spiritual content of religion is immaterial. What matters is that religion upholds the social order. Sacred books, in this understanding, have the same edifying role as great philosophical and literary works (this parallels Brooks advocacy for “the Western canon”).

But if Brooks is inventing a new religion he’ll need a name for it. Perhaps he could call it Western Canonism? Or if he wanted to rope James Comey into the faith, it could be labelled Niebuhrism.