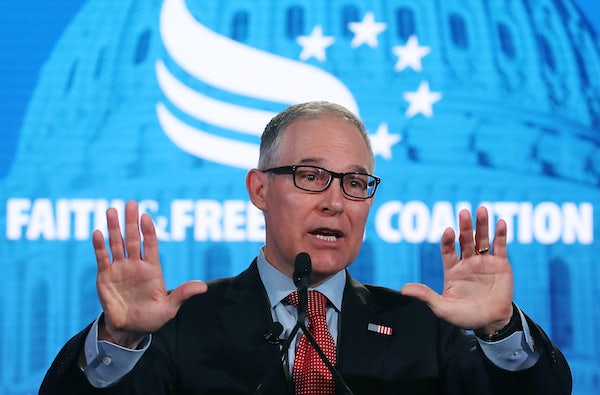 More and more Republicans are calling on Scott Pruitt to resign.

The Environmental Protection Agency chief’s ethics scandal continues to widen. On Friday, The New York Times revealed Pruitt’s habit of making EPA employees to do personal tasks for him, like finding his wife a job, and helping his daughter get an internship at the White House. Also on Friday, The Washington Post reported that Pruitt asked a public relations executive for energy companies to help him secure coveted tickets to the Rose Bowl. Pruitt got the tickets and took his family to the event, along with a taxpayer-funded 24-hour security detail.

Pruitt’s job has so far remained safe in spite of stories like these, due to continued support from key Republican lawmakers and President Donald Trump. But the facade is starting to crack. On Friday, Trump expressed displeasure with Pruitt’s misbehavior for the first time. “I’m not happy about certain things. I’ll be honest,” Trump said, according to Bloomberg. “He’s done a fantastic job running the EPA, which is very overriding. But I am not happy about it.”

Key Republican lawmakers are getting fed up, too. Senator Jim Inhofe—Pruitt’s close friend and mentor from Oklahoma—said on Thursday that he has “had enough” of Pruitt’s controversies, and that “something needs to happen to change that.” Inhofe added, “One of those alternatives would be for [Pruitt] to leave that job.” Wyoming Senator John Barrasso, the chair of the Senate environment committee, which oversees the EPA, said on Thursday that Pruitt will be called on to testify later this year. Pruitt has also drawn the ire of Iowa’s Republican senators, Joni Ernst and Chuck Grassley. Grassley threatened to call for Pruitt’s resignation in May. Earlier this month, Ernst said Pruitt “is about as swampy as you get here in Washington, D.C.”

Back in April, only five Republican lawmakers had called for Pruitt’s resignation: Carlos Curbelo, Ileana Ros-Lehtine, Elise Stefanik, and Frank LoBiondo in the House, and Susan Collins in the Senate. This month, Louisiana’s Republican Senator John Kennedy joined the chorus. “It’s time to find another line of work,” Kennedy said of Pruitt. So did Iowa Congressman David Young, who said this week that he “wouldn’t lose sleep” if Pruitt were let go.

The news about Pruitt has been hard to miss, but House Speaker Paul Ryan told reporters on Thursday that he hasn’t “paid that close attention” to Pruitt’s sandals. “I don’t know enough about what Pruitt has or has not done to give you a good comment,” he said.