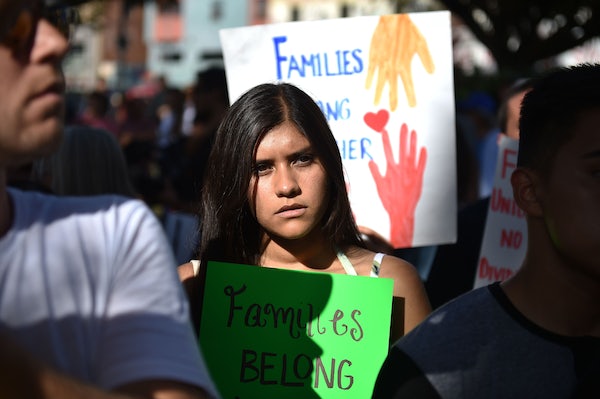 The GOP is the party of Trump on separating families.

If you only scanned the headlines you might get the impression that both of Americans political parties were rising up in opposition to President Donald Trump’s policy of separating children from their parents in border apprehensions.

These headlines are creating a false impression that there is a serious Republican divide on the family separation policy. It is much more accurate to say that the party is on board with the policy even as a few Republican lawmakers, usually in mild terms, dissent.  In fact, the policy is popular among Republicans even as it is opposed by the general population.

A recent Ipsos poll asked, “It is appropriate to separate undocumented immigrant parents from their children when they cross the border in order to discourage others from crossing the border illegally.” The results demonstrated a stark partisan divide. “Of those surveyed, 27 percent of the overall respondents agreed with it, while 56% disagreed with the statement,” The Daily Beast reports. “Yet, Republicans leaned slightly more in favor, with 46% agreeing with the statement and 32 percent disagreeing. Meanwhile, 14 percent of Democrats surveyed supported it and only 29% of Independents were in favor.”

Given these numbers, it is hardly surprising that most Republican lawmakers have decided to play it safe by not speaking out against Trump’s policies.

It’s notable that the most outspoken critic of the policy, former First Lady Laura Bush, has never been an elected official. Nebraska Senator Ben Sasse issued a Facebook rebuke that mixed strong language (“wicked”) with a framing of the issue that actually echoes what the Trump administration is saying (casting blame on previous administrations). Utah Senator Orrin Hatch also tried to thread the needle by praising Trump even as he suggested a move away from the policy.

On immigration, including family separation, the Republicans are the party of Trump. Anti-immigration sentiment is increasingly defining the GOP, as abolition defined an earlier incarnation of the party in the 1850s and populism defined the Democrats in the 1890s. Any solution to America’s myriad immigration problems has to start with the recognition that the nativism of many voters is the single biggest hurdle to crafting humane policies.