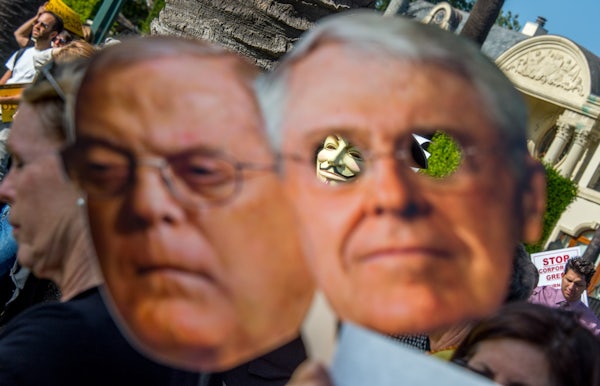 The Koch brothers know how to play the long game to change America.

Nashville, Tennessee won’t be getting a better transit system with light-rail trains and more buses thanks to the efforts of Charles and David Koch. As The New York Times reports, the super rich Koch brothers, via their Americans for Prosperity front group, have launched effective, tech-savvy campaigns all over America to thwart public transit initiatives.

Using data to target voters who distrust big government and an army of canvassers, Americans for Prosperity has been inventive in turning the public against mass transit. “In Little Rock, Americans for Prosperity made more than 39,000 calls and knocked on nearly 5,000 doors to fight a proposed sales-tax increase worth $18 million to fund a bus and trolley network,” The New York Times notes. “In Utah, it handed out $50 gift cards at a grocery store, an amount it said represented what a proposed sales tax increase to fund transit would cost county residents per year.”

The Kochs are motivated by a mixture of ideology (public transit is socialistic) and self-interest (they are heavily invested in fossil fuel extraction and automobile production). But the efforts of Americans for Prosperity testify to something more than the Kochs’ commitment to standard conservative politics.

The Kochs aren’t just right-wing billionaires, but men who think about politics in big, broad, and far-reaching ways. They have money to burn (Charles Koch is the ninth richest man in the world) and have decided to spend it on changing the direction of American politics at every level, from municipal to federal. Liberal billionaires, by contrast, prefer to focus either on winning national elections or global health policy (as with Bill and Melinda Gates’ campaign to end malaria).

There’s no real counterpart on the left of billionaires so committed to an ideological vision of America that they are willing to take up every small fight they on issues like municipal transit. The ambition of the Kochs is what sets them apart and allows them to keep winning small battles that could, in time, add up to a total victory.