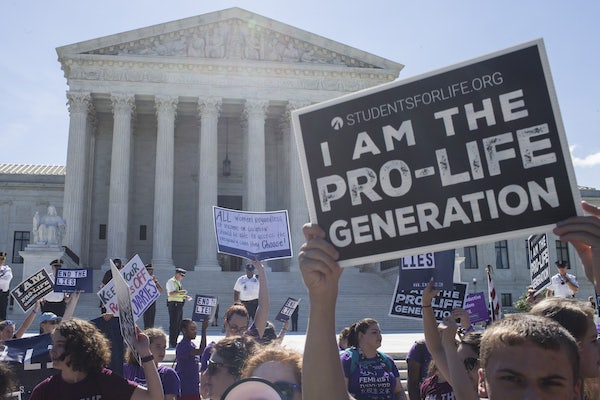 The Supreme Court just made it easier for crisis pregnancy centers to lie to women.

The nation’s highest court ruled 5-4 that California’s Freedom, Accountability, Care and Transparency Act (FACT) violated the First Amendment rights of crisis pregnancy centers. As Nina Totenberg explained for NPR on Tuesday morning, FACT requires pregnancy centers to advertise that they are not licensed medical facilities and do not have licensed medical professionals on staff. The law also requires centers that do have licenses, but only provide limited care, to post a sign stating that the state provides free or affordable access to reproductive services, including abortion.

As The New York Times reported, the law was passed after the “California Legislature found that the roughly 200 centers in the state used ‘intentionally deceptive advertising and counseling practices that often confuse, misinform, and even intimidate women from making fully-informed, time-sensitive decisions about critical health care.’” The National Institute on Family and Life Advocates, which operates a chain of crisis pregnancy centers in the state, sued, arguing that the law violated its free speech rights. The U.S. Supreme Court agreed, with Justice Clarence Thomas writing the majority opinion.

It’s a blow not just to the state of California, but to reproductive rights activists. Crisis pregnancy centers deliberately employ deceptive advertising practices in order get women through the door: They’ll offer free pregnancy tests, for example, without also advertising that women can’t receive abortions or contraception at the clinic. In some states and municipalities, clinics have adopted names that sound similar to the names of abortion clinics, and occasionally set up shop across the street or next door to real clinics. As a result, it’s relatively easy for women to make an appointment at a crisis pregnancy center without realizing she won’t be able to access a full range of reproductive health care options at the center.

Due to the Supreme Court’s ruling, it will now be very difficult for states to even prohibit centers from falsely advertising their services. The ruling could have a knock-on effect of prohibiting conservative states from requiring physicians to give false information about abortion risks to patients, as Eric Citron noted at SCOTUSblog, “One interesting dynamic in this case is that many states have laws telling abortion providers what they need to say to women seeking abortions. Those laws have been challenged as undue burdens on the right to obtain an abortion... But they haven’t been challenged under the kind of First Amendment theory developed here. In the long run, the ruling here may limit states’ ability to force doctors to provide certain kinds of information.”

That’s a very tentative, long-term upside to a ruling whose more immediate consequences are clear and damaging for women in need of clear medical advice.